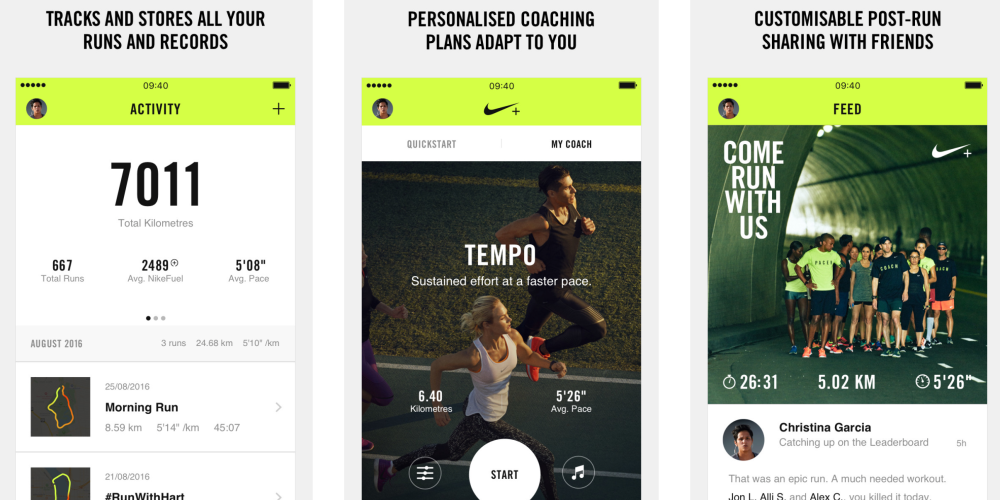 Nike today announced that it is completely rebranding its popular Nike+ Running app. The app is now the “Nike+ Run Club” app, while today’s update also brings a host of performance, feature, visual, and stability improvements.

Alongside the rebrand, the app has been completely redesigned visually. Users now have quicker access to information like run time, distance, and location. Additionally, there are more personal post-run sharing options with friends, which likely will help increase the motivation of people to workout in the first place. Building on the new social features, there is support for leaderboards that allow users to directly compete with friends and other runners around the world.

Nike is also heavily touting the Apple Watch integration of its Run Club app. Nike’s focus on Apple Watch integration comes as it is expected for Apple to refresh the Watch lineup later this year with a built-in GPS. While currently the Nike+ Run Club app on Apple Watch tracks pace distance, elevation, heart rate, and mile splits, a GPS-equipped Apple Watch would mean that users could go on runs without their phone and still track location. In this situation, the Watch itself would be able to track the location of the run, giving users the ability to lighten the load of devices they have to carry while running.

Today’s update also offers a variety of new personalized coaching plans. Nike says that the goals are meant to change as the users grow. “Whatever your goal, your Nike+ Coach has a plan for you. One that STARTS with your goals and fitness LEVEL, and ADAPTS as you progress,” the company says.

The full changelog can be read below:

Nike+ Run Club is available now on the App Store for free.