Review: The Soundcast VG1 packs a lot of punch into a compact, waterproof speaker 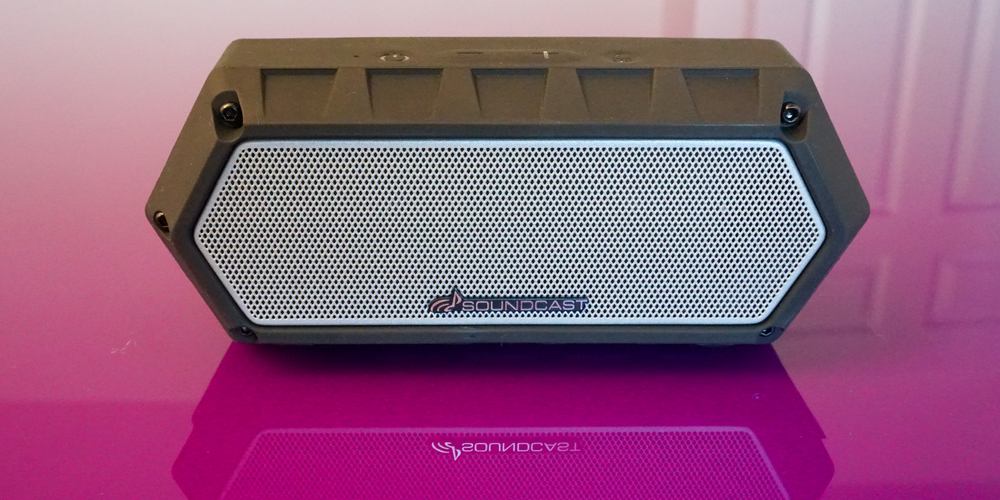 Bluetooth speakers are so ubiquitous that, to be honest, my eyes have a tendency to glaze over at the mention of yet another one. The Soundcast VG1, however, caught my attention because its earlier – and more expensive – Melody speaker got rave reviews.

The VG1 looked, on paper, to be the holy grail of highly-portable outdoor speakers, claiming good sound quality, decent volume, long battery-life and true IP67 waterproofing at a relatively affordable $150. The question was: could it deliver in practice … ?

The design of the VG1 is best described as ‘rugged retro.’ The combination of rubberized black casing, silver metal grilles and Soundcast logo overlayed on the front brings to mind a Marshall system, and that’s probably not accidental. The rear of the speaker looks identical to the front bar the logo.

It measures 6.8×2.9×2.3 inches, and weighs one pound. That’s not quite pocketable for most of us, but it easy enough to slip into most bags and sufficiently light that it doesn’t add much perceived weight if you’re already carrying a few bits of tech.

You get decent-quality corded USB charging and 3.5mm cables in the box – not always a given with speakers these days – along with a shoelace-style lanyard.

IP67 means that it can survive complete immersion in up to a metre of water for 30 minutes. The company claims it actually does better, surviving a dunking in ten feet. The rubber coating also makes the speaker easy to grip, even with wet hands, so it seems to be well thought out for its intended role as a poolside/beach speaker.

Those rugged looks also seem reflected in reality. While doing some distance testing outdoors, I placed it on the edge of a table and then started pacing off the distance. Doing so, I knocked the table and it fell onto the paving slabs. It continued playing, and picked up only a small scuff.

Controls are ultra minimal. You get a combined power/pairing button, a pause/play and two buttons for volume up and down. That’s it. Of particular note, there’s no next/previous track buttons, which seems an odd omission.

There’s a very subtle LED to indicate power and pairing. Under a rubber flap on the side, there’s a microUSB socket for charging, and two 3.5mm audio jacks, one in, one out. You can use this to connect two VG1s to get true stereo output.

Soundcast claims a 15-hour battery-life but doesn’t specify a volume level for this. I left it running at 50% volume in my car overnight – the loudest I could set it without it being heard in the house – and it was happily still going some ten hours later. So while I can’t yet verify the claim (I’ll update later), it certainly appears to have last long enough for a full day’s use.

I make no claims to be an audiophile, but am fussy about sound. I try to be a realist about this type of product – a really small, portable speaker is never going to deliver hifi-quality sound – but many cheap Bluetooth speakers simply sound horrible.

Given the size and price of the VG1, I was rather skeptical about its ability to deliver the kind of sound quality people had claimed for its larger and more expensive brother, the Melody. But I have to say that I was really impressed.

No, it’s not hifi quality. But for a standalone, battery-powered portable speaker, it’s really, really good. The twin two-inch aluminium-cone drivers deliver clear and solid highs and midtones, while the speaker also provides way more bass than I would ever have expected from a simple passive radiator in the rear.

Volume is also impressive. Racking it up to maximum, it’s louder than you’d ever want in a small room, and even outdoors it sounded pretty loud from ten feet away, and still perfectly acceptable at 20 feet.

At maximum volume, there’s just a hint of bass distortion, but that’s honestly me being fussy. One notch down, it’s perfect.

The angular design of the speaker means you can tilt the speaker back at an angle of about 30 degrees to direct the sound upwards from a table or kitchen worktop, but the sound quality suffers noticeably when you do, so I definitely wouldn’t recommend this.

You can also use the VG1 as a speakerphone. There it performed less well, due to the microphone: it could only pick up my voice clearly if I was within a couple of feet of the speaker, which kind of defeats the object of a loud speakerphone. But I see this as a very much edge-case for a Bluetooth speaker anyway.

At $150, the VG1 sits in an interesting space. It’s not a budget purchase – there are way cheaper speakers around – but neither is it an expensive one. It’s the kind of sum you only spend if you have a definite need for an outdoor speaker, but without laying out big bucks for something chunkier and less portable.

Size and weight wise, too, it’s not the sort of thing you’ll carry around with you routinely, but it is portable enough that it’s no hassle to throw it in a bag when headed to the pool or beach. Battery-life also seems long enough to mean that you can listen to it all day, as well as not having to think about recharging it when taking it away for typical use in a long weekend break.

If you care about sound quality, but still want something that’s both portable and affordable, the VG1 is well worth checking out.