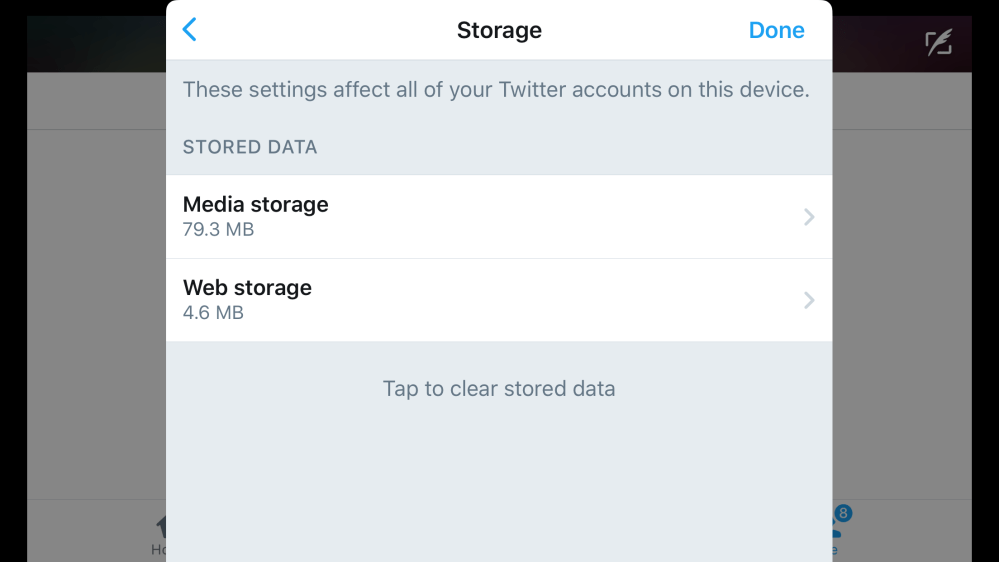 Twitter today is rolling out an update to its iOS app that makes it easier to manage the storage space used by the app, allowing you to regain some of your device’s internal storage.  The update brings Twitter for iOS to version 6.7.31 and is available now on the App Store.

Social media apps like Twitter and Facebook have been criticized for how much space their caches take up and today’s update on Twitter’s part aims to solve that problem. With the latest version of the app installed, you can track how much information it has downloaded, as well as delete data that you no longer want cached.

To do this, simply head into the Twitter app, tap the “Me” tab in the bottom right corner, and tap the settings gear icon near the top. From there, tap the “Settings” option and look for the new “Storage” category under the “General” heading.

You should now see a breakdown of what type of information Twitter has cached on your device. For me, the data is broken down into two categories: Media Storage and Web Storage. The former takes up the most space, while the latter is rather miniscule. You can tap on either of the categories to clear the cache and regain some of your device’s internal storage.

“We added a storage setting where you can see how much storage space caches use, with an option to clear them.”

How much data Twitter for iOS is storing really depends on how big of a Twitter user you are, how many people you follow, and how often you watch media in the Twitter app. For me, the amount of storage isn’t a lot, but I primarily use Tweetbot rather than the official application.

To see how much data Twitter for iOS is using, do the following:

Keep in mind, however, that some of the space listed here is taken up by the app itself, so don’t expect to regain it all by clearing the cache.

Twitter for iOS is available on the App Store for free.