Feature Request: Apple should bring these features from iBooks to every Now Playing screen on iOS

This week I bought and played through my first audiobook in iBooks (Shoe Dog) after realizing I have a habit of buying a lot of books then rarely making time to actually read them. I finished the 13 hour 22 minute book over the weekend and really enjoyed the experience (and the book). I listen to a lot of podcasts, so playing audio in the background while running errands is something I know I enjoy.

iBooks on the iPhone is a solid audiobook player. It works with Apple CarPlay, 3D Touch from the Home screen, and to my surprise has arguably the best Now Playing screen of any Apple app. Apple currently has three different versions of its audio Now Playing screen between its Music, Podcasts, and iBooks apps, the audiobooks version has features that every Now Playing screen should adopt.

The biggest feature is seen in the screenshot above: landscape support. iBooks supports landscape on iPhones while Podcasts and Music apps do not. That’s probably because people like to read text iBooks in landscape mode, one page at full width, so the iBooks team purposefully made their Now Playing screen work with landscape orientation.

Apple supports landscape mode on the Home screen on iPhone 6 Plus, iPhone 6s Plus, and iPhone 7 Plus, but plenty of apps including lots of Apple apps are fixed in portrait mode when launched including Podcasts and Music. It’s too bad really because iPhone 7 Plus includes stereo speakers when oriented in landscape mode. Apple advertises this feature with music playback by using Control Center in advertising since Music is portrait only. 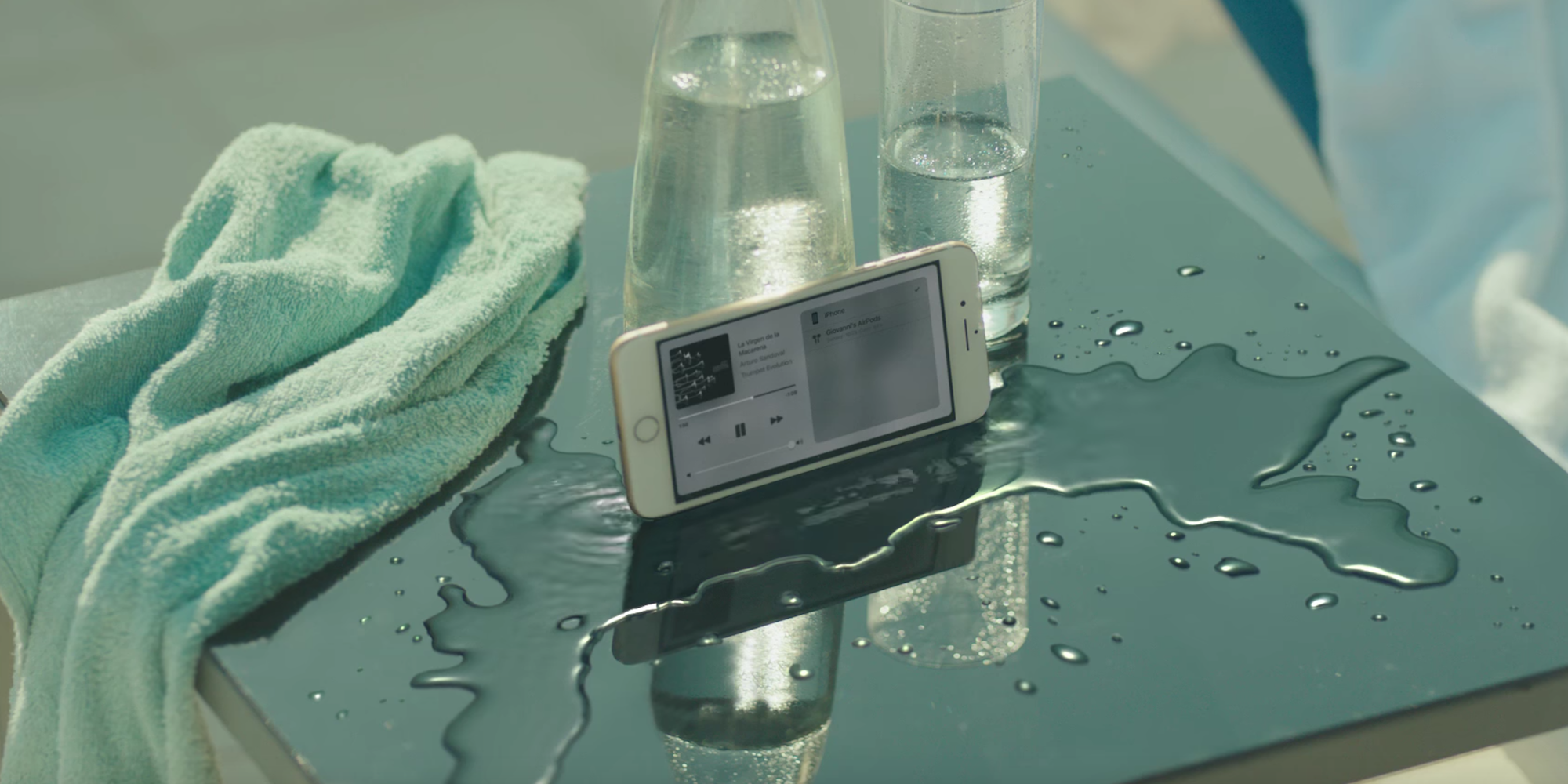 Control Center doesn’t rotate though. It’s fixed to whichever orientation your Home screen is when swiping up, then it’s modal until dismissing. The iBooks Now Playing interface is super smooth with rotating. As long as rotation lock isn’t activated, the artwork and play controls smoothly transition from being stacked top to bottom to being placed alongside each other. It’s a great implementation and something I would love to see in Podcasts and Music.

The tricky thing here is that iOS 10 dramatically changed the way Now Playing looks for the Music app. It’s now a card-like interface so the same exact method wouldn’t work. That’s what’s a bit frustrating: Apple nailed the design functionally, then changed it so landscape now would take rethinking. 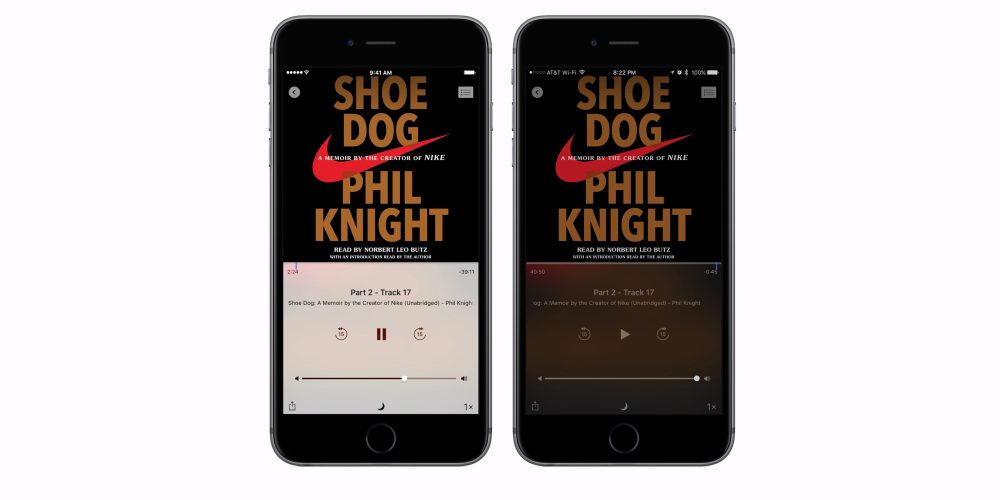 The iBooks audio player also toggles its appearance between a light mode and a dark mode. This is something else I haven’t noticed the similar Podcasts audio player interface do. I’m not sure if it’s based on display brightness, time of day, or something else, but it looks really good and would be great to see throughout iOS and other Now Playing screens.

Finally, iBooks lets you seek forward and backward by nudging the artwork on the Now Playing screen. There are also forward and back controls, but the artwork trick is a clever one that adds character and charm to the experience without being skeuomorphic like iOS 6 and earlier. You don’t need to know it’s there, but it’s something you can appreciate when you discover it. The longer you pull, the further ahead or behind it skips too. Apple’s other Now Playing interfaces do not have this. 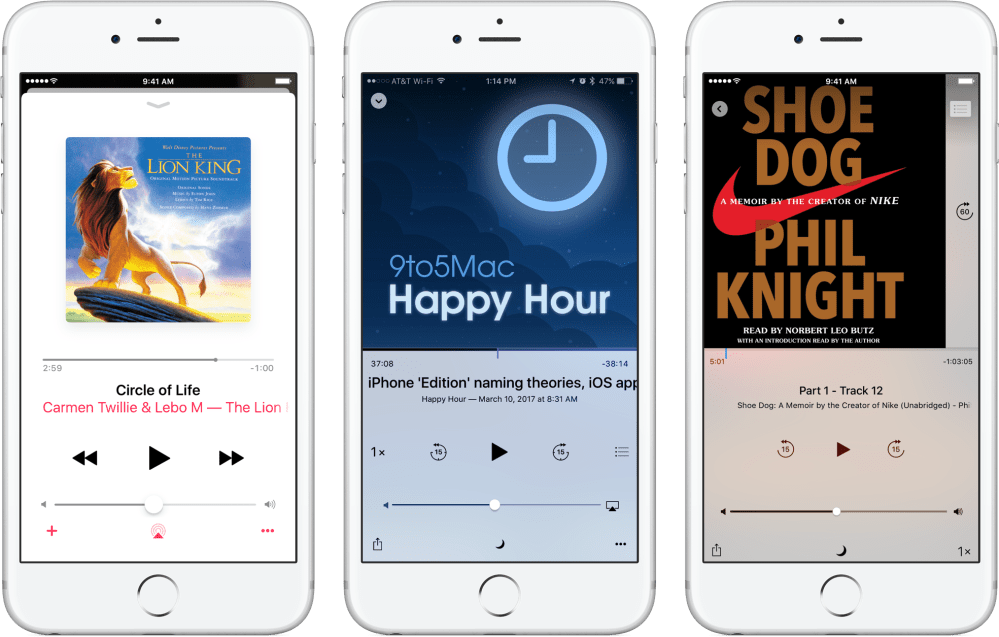 So landscape orientation, dark mode, and playback controls from the artwork are all tucked away in the iBooks Now Playing interface for audiobooks and not included with Apple’s other apps including Music and Podcasts. The Now Playing interface for Apple’s Podcasts app is similar in design, but Apple started going in a different direction design-wise with the Music app in iOS 10. I don’t expect all of Apple’s apps to look like iBooks in the future, but I do hope that the default Now Playing screen will adopt the iBooks features.