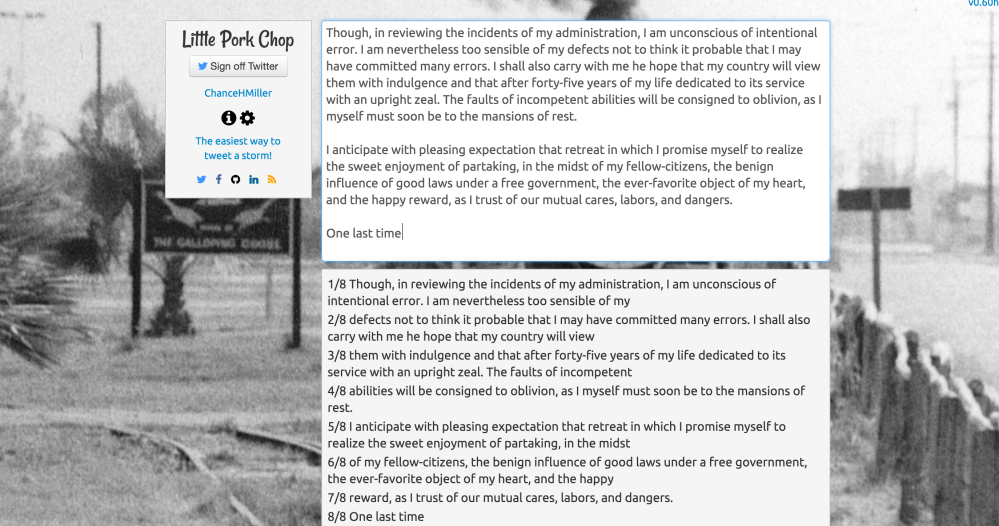 One of the practices that is becoming increasingly common on Twitter, for better or worse, is so-called tweetstorming. Twitter itself, however, doesn’t directly support tweetstorming, so instead, users generally number their tweets and type them out separately from each other.

A new tool from longtime blogger Dave Winer, however, aims to make it easier to share tweetstorms…

Winer has released a new macOS application called Electric Pork. The application allows users to type out something longer than 140 characters and instantly share it on Twitter. The app itself divides the idea into multiple tweets, thus taking over the hardest part about tweetstorms.

The app is relatively feature-rich, as well. You can change the delay between each tweet in a tweetstorm, add a hashtag to every tweet, change the order of tweets, and more.

After you post a tweetstorm, you’ll also have an RSS feed that shows all of your tweetstorms and allows others to follow along with you.

After you’ve posted you will have an RSS feed. Mine is located here. Yours will be at a similar address with your Twitter username in place of mine. The names are case-sensitive, so be sure to spell it in the same case as your Twitter screen name.

Try out the settings. You can change the delay between tweets, reverse the order add a hashtag to every tweet, and configure your RSS feed. Click on the gear in the command panel to the left of the text area to access your settings.

As you can see in the screenshot above, Electric Pork divides what you write into separate tweets and ensures that words are not cut off. Additionally, if you start a new paragraph, that means a new tweet will be started as well. Settings are accessible via the gear icon in the left sidebar. Here, you can change the prefix of your tweets, the timing, the order, and add a hashtag.

Winer notes, however, that this is still very much a beta version of the app and he’s looking for feedback. If you have problems with Electric Pork, of it works perfect, let Winer know in the comments of his original announcements post.

Is tweetstorming something you often do? Let us know in the comments.