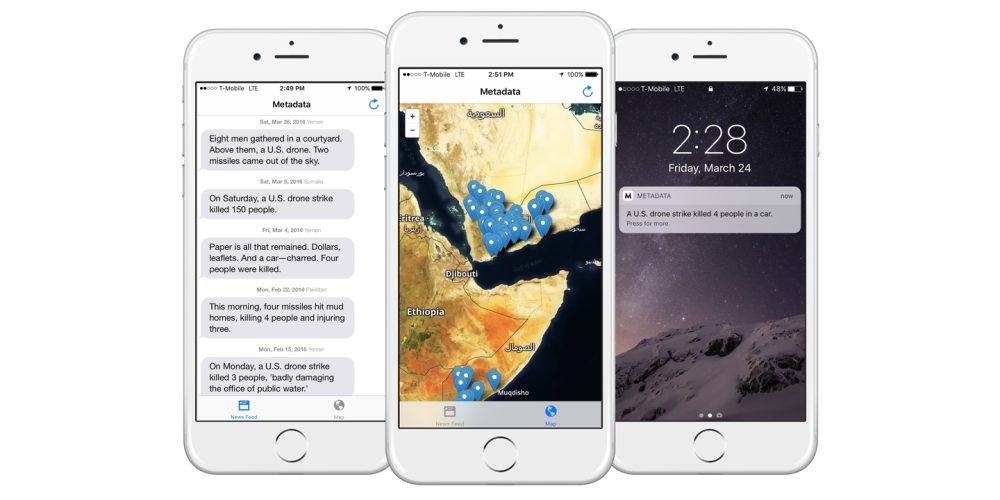 Over a year ago, Apple removed an app called Metadata+ from the App Store. The app sent iPhone users alerts when a United States drone strike led to death. Apple’s reasoning at the time was that the app contained “content that many users would find objectionable.”

Fast forward to this week and Metadata+ is again in the news for being approved and removed, all in the span of less than 12 hours…

In a post on The Intercept, Metadata+ creator and developer Josh Begley explained the situation, noting that the app has been rejected 12 times since 2014. At long last, however, the app was approved this morning and made available on the App Store for everyone to download. Begley was pleased with the decision, saying that people should be aware the “drone war.”

Begley explained that over recent years, he has occasionally resubmitted the app to see if Apple might change its mind. Today, it seemingly had reversed its viewpoint.

Over the years, I would occasionally resubmit the app, changing its name from Drones+ to Metadata+. I was curious to see if Apple might change its mind. The app didn’t include graphic images or video of any kind — it simply aggregated news about covert war.

Begley announced that his app was available from the App Store this morning at around 9AM ET. By 2:30PM ET, however, Apple had removed the app. At this point, Begley has not offered detail as to why Apple removed the app this time, but it likely centers around the same objectionable content reasoning that the company has cited in the past. Begley has a counter argument to that:

If anything about the app is “excessively objectionable or crude,” perhaps it’s the airstrikes themselves.

When the app was first approved and removed in 2015, we explained how it was unlikely that Apple would reverse its decision because it was the entire functionality of the app that was the center of contempt. What likely happened here is that Metadata+ slipped through the cracks of Apple’s App Store review team this morning and thus was briefly made available. Once higher-ups at the company, however, became aware of the app’s newfound status, it was quickly removed.

What are your thoughts on this? Is Metadata+ an app that should be allowed on the App Store or is Apple right with its “objectionable and crude” argument? Let us know down in the comments.