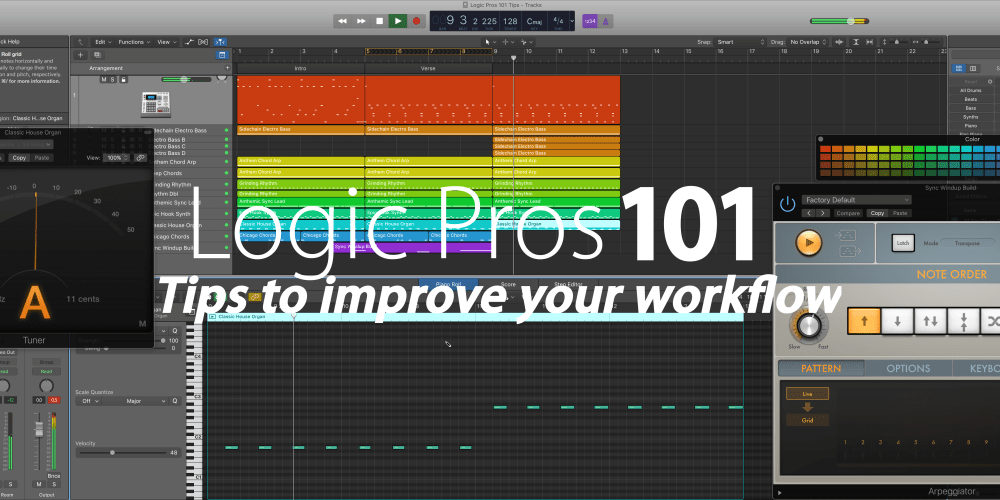 In our first four Logic Pros 101 installments, we introduced you to the Logic Pro X interface, built some solid groundwork on the basics of recording, and broke down some of the complexities of the Mixer. We also detailed Plug-in and Software interfaces in order to get you started making music as fast as possible.

The best way to learn anything is to actually use it and enjoy doing so, so today we take a (very brief) mid-semester break to go over some tips to help you supercharge the recording, editing, and workflow basics we’ve learned so far. They range from organizational suggestions and lesser known features, to some absolutely imperative navigational/editing techniques for anyone looking to master the ways of LPX:

Chapter one gave us a breakdown of Logic’s main interface and was largely an informational introduction. But being able to easily navigate your way through the Tracks Area with ease is a very important part of minimizing frustration and speeding up basic tasks:

Becoming comfortable with Tracks Area navigation is certainly a very important part of smooth workflow in Logic Pro X. Being able to quickly zoom the view of all your tracks (or individual tracks) with ease is one of the most direct paths to mastering it.

Option + Mouse/Trackpad Swipe (or Command + Keyboard Arrows): will zoom your view of the Tracks Area and everything in it to your liking. This works both vertically for the height of the tracks and horizontally with the corresponding gestures or Arrow key strokes.

Control + Option + Command + Arrow Keys: will allow you to zoom in individual Tracks. Highlight a Track Header in the Track Area and press that really long (but extremely useful) Shortcut to get a closer look at a particular track your working on/editing, etc.

Control + Option + Command + Delete: will quickly pop the individual track you just zoomed in on back to its original state.

In the second chapter we discussed creating tracks, track types, and even the basics of the audio and MIDI Piano Roll Editors. Here are a few additional features, tricks and tips to make things much more streamlined:

I spend many hours a day in LogicPro X’s Piano Roll editor and these are a few shortcuts I literally couldn’t do without:

There is a very fast way to duplicate or extend MIDI note patterns you have already created. While we can simply highlight a series of notes on the Piano Roll Editor and then copy and paste them by dragging and dropping while holding Option, as detailed in our previous lessons, here is a very fast (and amazing) way to double or Repeat MIDI note patterns. Simply highlight a series of notes and hit Command + R. Logic will then paste the selected note(s) with the same timing to the next consecutive beat. To avoid getting overly technical here, it is quite intelligent about the whole process and usually just understands what you’re after. You can see a before and after example above.

Next is how to move them around with ease. I often times find myself wanting to hear what a certain MIDI recording sounds like up or down an octave, whether it’s to better suite the mix at hand or to get a better feel of how the particular patch I’m using reacts to various frequencies (different notes). Simply double click a MIDI Region in the Tracks Area to open it in the Piano Roll. Then highlight the notes you would like to edit (hit Command + A if you want to select them all). Then hold the Option and Shift keys followed by the up and down arrows on your keyboard. This will quickly bump the selected notes up and down an octave (Option + Shift + Up/Down Arrows).

If you want to move the selected notes by a semi-tone (a single key up and down on the keyboard), do the same thing as described above but only hold the Option key (Option + Up/Down Arrows).

Shift + M: selects all the muted notes in the Piano Roll Editor.

The yellow Cycle Area we detailed in our recording basics chapter is a very handy tool for focusing on particular sections of a piece, whether you’re recording, doing some critical listening, or even editing. But this bright yellow tool for creating a loop on the timeline has even more tricks up its sleeve. Normally, we simply swipe and drag our mouse across the Ruler portion on the Tracks Area to create a loop-able Cycle Area. But if we hold Command while doing so, we can effectively get Logic to skip that portion of the timeline during playback. This is known as a Skip Cycle Area (aka gap in the space-time warp continuum).

This is great for quickly listening to and auditioning alternate arrangements of your song and more. Want to hear what it sounds like going straight from the intro into the second half of the verse, or maybe straight to the chorus? Create a Skip Cycle Area over the portion of Tracks Area you want to jump past, and then just put Logic in play and it will jump right passed that portion of the timeline.

Muting and Soloing tracks is an integral part of song creation. But sometimes it can be handy, especially after a session gets heavy with loads of tracks and ideas, to simply highlight just one Region in the Tracks Area. Simply highlight any region on the timeline and then hit Control + S to put it in solo. The Region/Logic will return it to its original state when the shortcut is pressed again. This feature is also available in the Control Bar customization options detailed in Chapter 1.

Chapter 3 detailed what those Channel Strips are all about and even how to keep everything in balance on the Mixer. Today, we are going to look at a way to make sure all your tracks are organized and how to better manage the various elements in your song.

Shift + C: will highlight all the equaled color tracks on the Mixer. This can be very handy for making alterations across a large selection of tracks. It can be a good idea to have all your drums one color, the bass tracks another, and so on. At least to keep things organized until you develop your own preferences.

Last time on Logic Pros 101 we detailed the Plug-in and Software instrument interfaces. We will certainly be diving into more of these in detail, like the Channel EQ, Compressors and more down the line, but today we have a couple features to highlight that might help your recordings and song creation in the early-going:

Logic Pro X has a great little guitar (or any instrument) tuner built-in. This is great for quick demoing or making sure your guitars and other instruments are sounding right before tracking them. Simply navigate to the track your guitar/instrument is plugged in to, and then click on the FX slots on its Channel Strip. In the Metering folder, you’ll find the Tuner. If you have ever used a guitar tuner on your iPhone (or anywhere really), it will be immediately familiar to you. It is a basic but entirely practical affair with a large readout and only the most basic of controls. It has the typical options all/most plug-ins have along the top, but outside of that there is nothing but a mute button in the bottom right corner, in case you want to tune up in secrecy. It just mutes the output, allowing you tune up using just the visual aid of the Tuner UI, until your instrument sounds great again. Very handy.

As a rule of thumb at this point, it is a good idea to have the Tuner plug-in on the very first FX slot on any given track, simply to get the most precise results. Sometimes other FX can make it hard for a tuner to its job properly.

Additionally found in the Control Bar customization options, Logic refers to this version of the Tuner as the Tuner utility. This instance of the Tuner will listen to the input signal we are sending to our interface, rather than on the track itself. Just another option for tuning up before tracking, but at this point it is likely easier to stick with the FX slot method.

Logic’s MIDI Effects are very powerful and creative tools for music makers, as detailed in our Plug-ins chapter. None more immediately useful than the Arpeggiator, it can turn basic boring chords into a flurry of rhythmic melodies. But sometimes it can be useful to actually see the MIDI that results from using this effect. Luckily, we can simply drag the icon in the top right corner (small square with arrow pointing to the right beside the yellow play button) directly from the Arpeggiator’s Plug-in interface, to any MIDI track in the Tracks Area. The icon will only become active while Logic is in play.

Now we can paste that resulting arpeggiated MIDI data to other Software Instrument Tracks or just for more particular editing in the Piano Roll Editor.

It is always a good idea to review the shortcut tips found at the end of each chapter in addition to some of the suggestions above. Here is a quick refresher of some of the most important options:

1. Getting started with Logic Pro X – The interface

2. Recording basics, creating tracks and getting started with editing