Apple to stop using Imagination Technologies GPU tech within two years in favor of its own custom architecture, $IMG stock falls by 70% 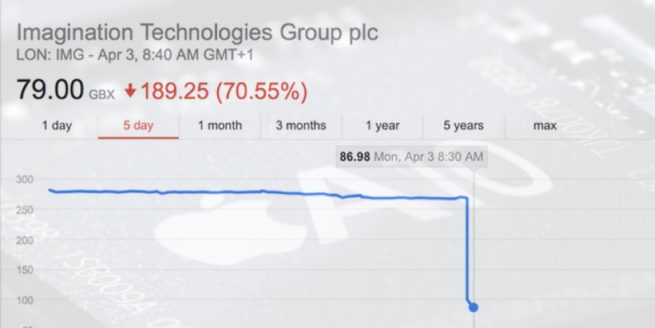 Up to now, Apple’s custom silicon-on-a-chip (A10 Fusion, A9, A8 etc) have relied heavily on GPU designs from Imagination Technologies for graphics performance tasks. This means Apple pays Imagination a royalty for every iPhone and iPad sold; the company generates about its revenue from Apple.

Today, Apple announced that it will stop using Imagination Technologies intellectual property within two years, ending its royalty payments. $IMG stock plummeted in wake of the news, falling by 70% to eight-year lows.

Apple told Imagination Technologies, which is based in the United Kingdom, that it is working on its own custom graphics architecture to control more of the core technology, in the same way that it already architects custom CPU silicon designs.

With notification by Apple that Imagination Technology intellectual property will be abandoned within two years, this suggests that Apple will be using a custom GPU stack in the Apple A12 chip.

Naturally, investors are very concerned that $IMG’s revenues are about to be slashed in half, sending the stock price to its lowest level since 2009. 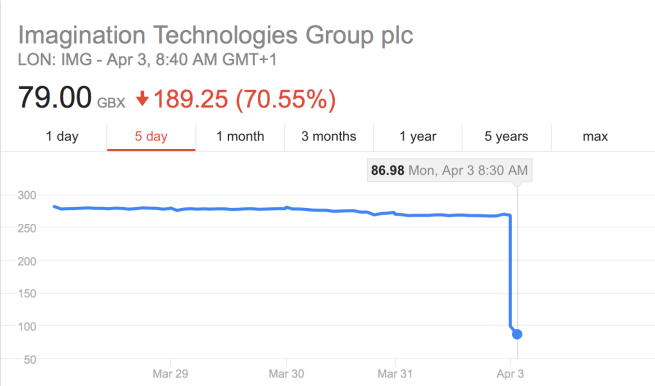 However, Imagination Technologies disputes the claims that Apple will be able to rollout an independent GPU architecture without infringing on its patent portfolio. In a statement, the company said:

Imagination claims that making a mobile GPU is so complicated and intricate that Apple will be unable to do it without infringing on IMG patents and ultimately pay IMG a licensing fee once again. Apple is unlikely to be merely bluffing: it successfully showed with the Apple A6 CPU design (and onwards) that it can design entirely-custom ground-up CPU architecture which is not only independent, but also better than the wider industry’s attempts.

Imagination said it will negotiate with Apple about potential alternative ways to license its technology to Apple. Apple declined to comment, although it seems unlikely that Apple will be swayed away from its aims of a custom GPU design, as the company loves to control more and more of the core technology inside iPhones and iPads.