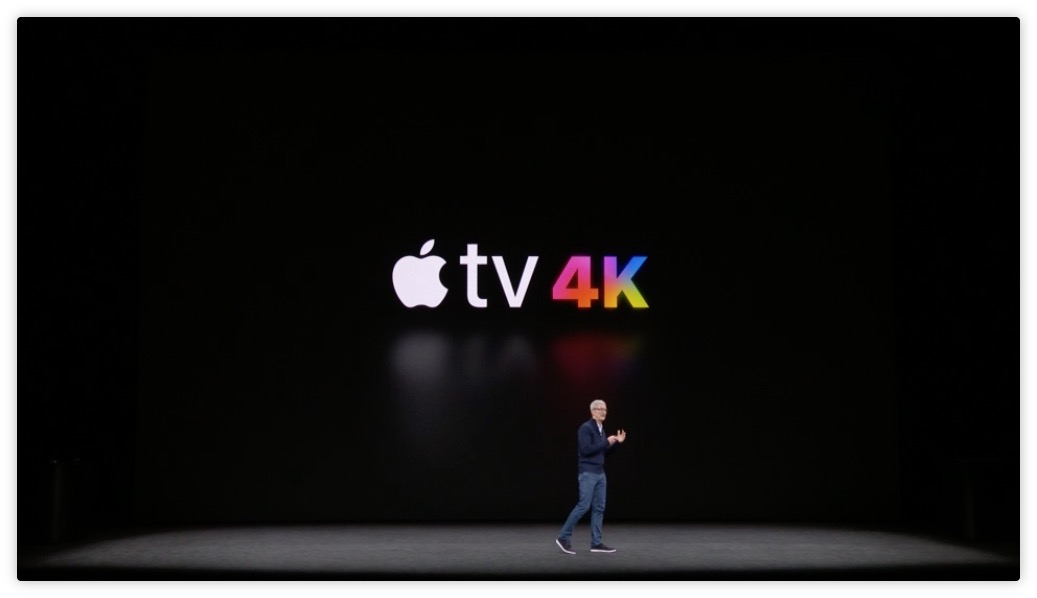 Apple used a special projector in the theater to demo the ‘cinematic quality’ output. The company demoed the new Spiderman movie in 4K HDR.

The new box is powered by the A10X Fusion Apple chip, the same chip that is in the new iPad Pro. CPU performance improves 2x over the previous generation box.

tvOS will add live sports from next month in the TV app, also available in the iPhone and iPad app. Access ESPN, MLB and NBA from within the TV app; the app will present new shows automatically.

Apple says the new A10X chip enables even more beautiful and expansive gameplay. Many games can even render at 4K. 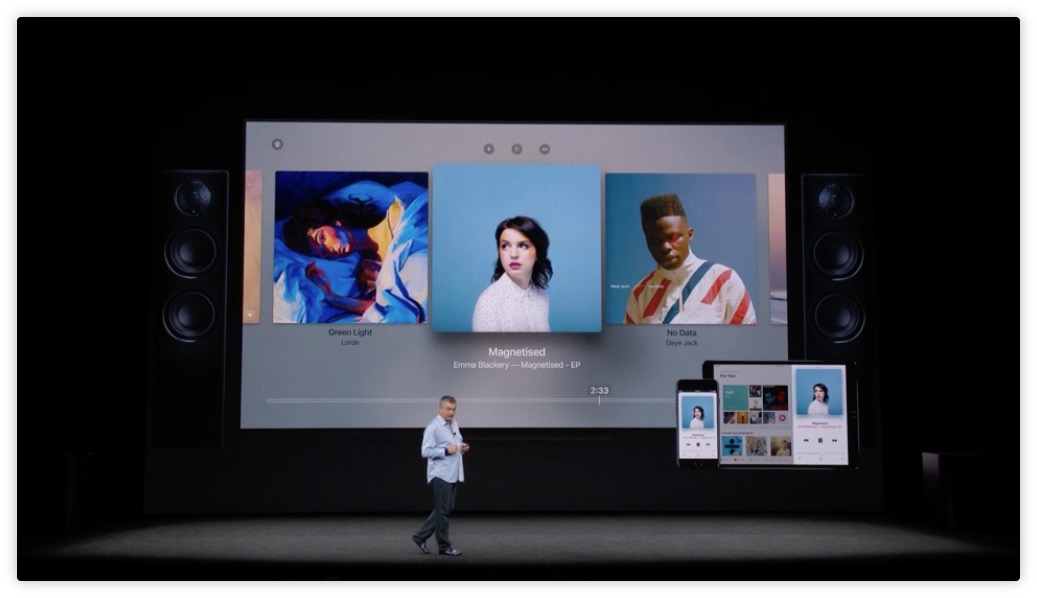 With the introduction of Apple TV 4K, the Siri Remote gets a subtle redesign with a new white circle around the “menu” button.

“Bring the magic of the cinema straight to your living room with the new Apple TV 4K,” said Eddy Cue, Apple’s senior vice president of Internet Software and Services. “Customers will love watching stunning 4K HDR movies from an impressive catalog on iTunes, while also getting automatic upgrades of 4K HDR movies already in their iTunes library and enjoying 4K content on services like Netflix and Amazon Prime Video, coming soon.” 4K and HDR

Support for both Dolby Vision and HDR10 ensures users can enjoy incredible-looking TV shows and movies on any HDR TV. Built-in high-performance 4K video scaler makes HD content look better than ever on a 4K TV.

Always outputting to the highest resolution possible allows viewers to get the most out of their TV, whether it’s an older HDTV or the latest 4K Dolby Vision OLED. Automatic detection of a 4K TV’s capabilities optimizes setup for the best quality picture.

Siri and the Apple TV App

The TV app will expand to seven countries by the end of the year, making it easier for viewers to discover and watch TV shows and movies from multiple apps in one place. Siri and the Apple TV app are easy ways to find and play exactly what you want. The TV app brings all your favorite shows and movies together, and Siri makes it possible to search and access content across Apple TV using just your voice.

The TV app supports over 60 services on Apple TV and iOS devices, with more being added all the time. Whether you’re at home or on the go, it’s easy to discover and watch TV shows and movies from multiple apps in one place.

Siri is smart about 4K HDR, so it’s unbelievably simple to find movies and TV shows in the highest picture quality across your apps (e.g., “Show me movies in 4K”). Later this year, the TV app is making it easier than ever to watch and get updates about live sports just by saying “Watch the Warriors game” or “What’s the score of the Cubs game?”

Sports fans in the US will be able to track their favorite teams and get on-screen notifications whenever they are playing, as well as see all the teams, leagues and sporting events currently playing through a dedicated Sports tab.2 Starting this month, the TV app will be available in Australia and Canada, in addition to the US. And, by the end of the year, it will expand to France, Germany, Norway, Sweden and the UK.

Apple TV 4K is the perfect big screen companion to iPhone and iPad, bringing family and friends together for an incredible viewing experience.

Apple TV is the perfect addition to any household, with great apps from the App Store on Apple TV, as well as photos, videos, music and more. If you already own an iPhone or iPad, there’s no better choice in the living room than Apple TV.

Users can share recent photos and videos from your iPhone and iPad, including the best Memories, with friends and family on the biggest screen, with iCloud on Apple TV.

It’s also simple to send movies, TV shows, home videos and photos from iPhone or iPad instantly to the TV using AirPlay from your iOS devices. With support for AirPlay 2, coming later this year, Apple TV can control multiple AirPlay 2-compatible speakers as well as your home theater speakers to create the ultimate home music experience.

Apple TV goes beyond entertainment to help deliver on Apple’s vision of the smart home. Since Apple TV is always at home, it’s perfectly suited to act as a home hub for all of your HomeKit accessories, enabling remote access as well as automated control (e.g., automatically turning on the lights at sunset).

Apple TV 4K starts at $179 (US) for 32GB or $199 (US) for 64GB, joining Apple TV (4th generation) 32GB at $149 (US), available from apple.com and Apple Stores, as well as through select Apple Authorized Resellers and carriers (prices may vary). Customers will be able to order both Apple TV 4K models beginning Friday, September 15, with availability beginning Friday, September 22. For more information, visit apple.com/tv.