Apple TV 4K reviews: The best streaming TV box available, but not for everyone 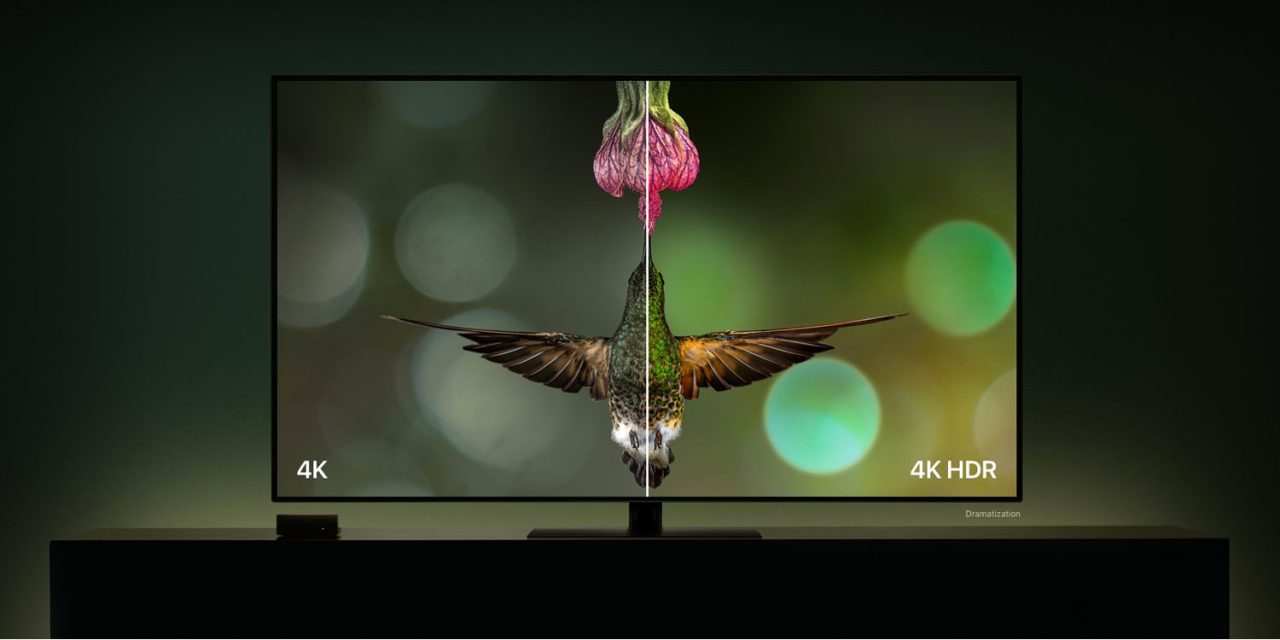 Apple’s tactic of making advance review models available to selected publications, and setting an embargo on publication, means it’s able to control the flow of reviews so that they all get maximum attention.

On Tuesday, it was the iPhone 8 (including our review). Yesterday, the Apple Watch Series 3 (our review). And today it’s the turn of the Apple TV 4K.

The bottom-line of most reviews is that it’s an expensive device compared to alternatives like Chromecast, Fire TV and Roku, and only makes sense if two things are true …

First, to justify an Apple TV at all over competitor devices, you need to be deeply embedded into the Apple ecosystem. Second, you either need to have a 4K TV already or plan to buy one soon. Otherwise, you’re better off with the cheaper 1080p version, upgrading to the latest model when you finally make the switch to 4K.

The new Apple TV gets a faster processor, which should make high-end games better to play. A new remote offers more precise motion control and a raised menu button to make it easier to orient yourself without looking. These features alone aren’t enough to justify an Apple TV 4K unless you’re a gamer. The non-4K version is getting the new remote, too. Picture quality is the same for both versions on regular HD sets like mine.

In any case, Apple TV — with or without 4K — will be most useful if you’re already tied into Apple’s system with iDevices and iTunes. Given that rival devices are cheaper, what you’re buying isn’t the device, but an experience — integration and syncing with all your other Apple gadgets. For instance, 4K video taken on an iPhone will play easily on an Apple TV 4K.

If you’re in that camp and are thinking of buying a new TV in the next few years, there’s a good chance it will be 4K, so you might as well choose the 4K version of Apple TV now. But if it’s longer, a better Apple TV will likely be out by then. The non-4K version will do just fine for now.

If you don’t have a 4K TV, you don’t need the new Apple TV 4K (yet, anyway). The new Apple TV will work on non-4K displays, too, but I’d just recommend getting the less expensive previous generation ($149 vs. $179 for the 4K model), unless you’re considering upgrading to a 4K TV in the future.

And if you do have a 4K TV, Apple’s new model, is the most powerful — and expensive — streaming device you can buy.

It’s really only for those who want to buy content from the iTunes store, use an over-the-air tuner to watch broadcast TV (like ABC or NBC), or connect their Macs or iPhones via AirPlay. It’s also designed specifically for people who use Apple products. For example, you can turn your TV into an external monitor for your Mac with AirPlay, or use your iPhone to type in usernames and passwords so you don’t have to use the horrible on-screen keyboard. Android and Windows users don’t have these options and should consider other streamers.

Sure, the Apple TV 4K offers some extra bells and whistles, like being able to control your smart home, download third-party apps (like Panna, a cooking app, or Zova, a fitness app), or view iCloud library photos on the big screen. But the bottom line is: If you just need something to stream on-demand content from providers like Hulu, Netflix, HBO Now, or Amazon Video, the Roku ($60-$100), Fire TV Stick ($40) (the Fire TV with 4K Ultra HD is currently unavailable), and Chromecast ($35 to $69) have got you covered.

CNET says it’s the best product on the market, but others get close for much less money.

The Bad: The Apple TV 4K is still expensive, and cheaper streaming devices from Roku and others offer similar image quality and capabilities. Up-conversion of non-4K/HDR video is confusing and doesn’t improve image quality.

The Bottom Line: Apple’s 4K HDR streamer combines peak picture with a high-end feel nothing else can match, but it costs too much for most people.

The Independent thinks the image quality makes it worth the price, even if a 4K TV is something you plan to buy later.

This is a hugely upgraded TV box, a welcome improvement on the last model, even if it’s taken a long time to come. Now, it’s the leader of the pack for image quality which is really outstanding, especially with the arrival of HDR as well as 4K and the growing amount of content available. On the right TV, this is about as good an image as you can see, certainly in streaming terms […]

If you think you’re going to upgrade to a 4K screen soon, then the newer model is definitely the one to go for. Until you’ve bought your new TV it’ll still be able to stream in your current resolution and it’ll wait, patiently, until you’re ready to upgrade, when it can reveal its full potential.

The intuitive interface, wide range of apps, the access to Netflix and Amazon Prime Video and the forthcoming Apple TV app are all strong reasons to choose this box.

Mashable sees this one as strictly for Apple loyalists.

As great as it is to finally have access to 4K and HDR content via an Apple TV, the biggest issue right now is that the price is, for now, very difficult to justify when you have 4K-ready competition from Roku, Amazon, and Google at a fraction of the cost.

Not that there aren’t benefits to buying into Apple’s premium. If you’ve already invested a lot of money into iTunes content, then it may be worth it to pay the extra cost upfront (especially if all those free 4K conversions come through).

And Apple’s Siri-powered universal search is still difficult to beat, especially considering how easy it is to find 4k and HDR content.

But whether that balances out the $179 price (or $199, if you want the 64GB version), is another matter. With so much competition coming in at significantly under the $100 mark, the “Apple tax” is harder to justify here. For all but the most dedicated Apple loyalists, the new Apple TV is likely to inspire buyer’s remorse.

Stuff did a head-to-head comparison with Sky Q for its British audience and says it depends on your content tastes.

On paper, Sky Q gives Apple TV 4K a bit of a kicking in every place but price. But then it does give you more content in exchange. Do you see our dilemma?

The thing is, if you have a 4K TV, the likelihood is that you’ll have Netflix and Amazon Prime video built-in there already. So your £179 (or £199) outlay is more likely going to be because the 4K movies offering on iTunes is excellent. And though it looks promising, we don’t know exactly what it’ll be yet.

No matter what it is at launch, we’d expect it to grow quickly, and at reasonable prices too. But the same could be said of the Sky Store 4K content. So what’s our advice?

If you’re into lots of content – movies, documentaries and sport – and want it at the best resolution possible, Sky Q is your best option. If you prefer to pick-and-choose your content and are looking largely for 4K movies, Apple TV 4K will probably work best for you, and save you money in the process.

TechRadar says it’s a good upgrade for existing Apple TV users with 4K TVs, but doesn’t yet earn its keep for a more general market.

There’s a lot to like about the Apple TV 4K. It’s got a nice clean interface, and the inclusion of support for Dolby Vision sets it apart from much of the competition. Ultimately the box will be most helpful to people already invested in Apple’s ecosystem, who will benefit most from its Apple-specific features like HomeKit and AirPlay.

For: Dolby Vision support. tvOS interface is clean and simple. Plays well with other Apple devices. Remote is responsive.

Against: No Amazon Video at launch. Siri can frustrate. Few benefits for non-4K owners.

Yes, the $179 Apple TV 4K finally delivers gorgeous high fidelity video, but as usual, you’re paying a premium for convenience and ease-of-use. Contrast with something like the Roku Ultra, which you can find for $79.99, or the Amazon Fire TV, which is usually $89.99 when it’s in stock. The way the Apple TV 4K integrates with the other Apple-powered devices in your home is its most distinctive argument, but one that depends increasingly on a fanbase with deep pockets […]

The good: HDR support dramatically improves the viewing experience, easy setup and other useful features for iPhone owners, can search for 4K content with Siri.

The bad: Much more expensive than other 4K set-top boxes.

Who should buy: Apple fans willing to pay a premium for convenience.

The Verge thinks that Apple has the right ambition, but isn’t there yet, noting no Dolby Atmos support as yet, and no 4K video from YouTube.

If you’re already invested in a huge iTunes movie library, or you buy so many movies that Apple’s cheaper pricing makes a big difference to you, you’re not going to be unhappy about buying an Apple TV 4K. It’ll be fine, and having your existing library get upgraded will be nice, although the HDR upscaler will occasionally make you sad.

But if you just want to watch some Netflix and you’re fine with renting movies from a service like Vudu or Amazon, stick with the apps on your existing 4K HDR smart TV for now or pick up a Roku. If you absolutely must spend a bunch of money, buy an Xbox One S bundle for $249 — you’ll at least get a free game out of it as well. All of this stuff will be messy and annoying in different ways, but they’ll get the job done.

I am very confident Apple is going to figure this TV thing out. It’s the only company that has the combination of power and care to actually do it. But the Apple TV 4K’s unrealized potential just makes it obvious that the future of TV is still pretty far away, and it’s simply too expensive to gamble on in the meantime.

What are your views? Worth the premium, or do you plan to stick to the 1080p version – or use a cheaper device? Let us know in the comments.