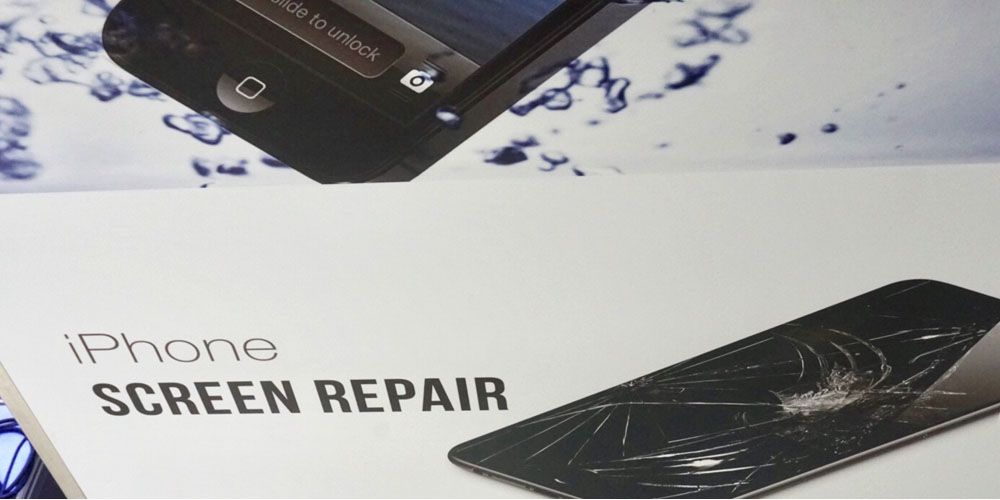 China’s Shenzhen market is famous for the unofficial iPhone repairs and upgrades available from the many stalls there. Hong Kong’s Wanchai electronics market may be smaller, but in the five floors of tightly-packed stalls, you can’t turn around without bumping into an iPhone repair service.

The market sells everything from phone cases through cheap-and-nasty Windows laptops to expensive drones and high-end cameras. But there’s one thing that really stands out, and that’s the ubiquitous and entirely unofficial presence of everything Apple …

The stalls are basic, but the services are comprehensive. Several of them have detailed price lists of everything from cracked case and screen replacements to main boards. Other than the iPhone 8 and X, which will surely be added soon, you can get repairs for every generation of iPhone from the iPhone 4 onward.

Macs, too, can be repaired, and Macs also seemed to be the computer of choice when it came to slideshows advertising their various services. 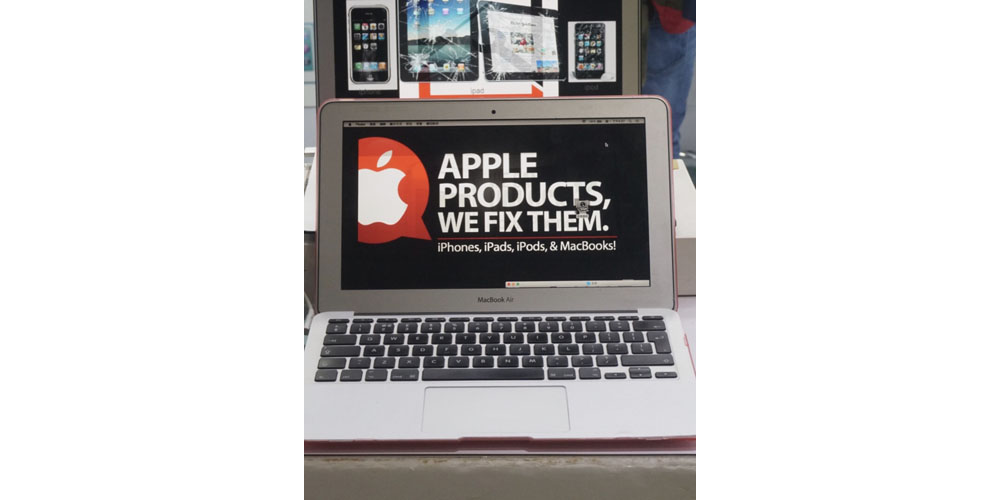 You do have to be careful, however, as not all repair costs are cheaper than Apple’s pricing. For example, replacing a cracked screen on an iPhone 7 at a Hong Kong Apple Store would cost you HK$1158 (US$148) while one price list in the Wanchai market was quoting HK$1480 (US$190).

In practice, you can almost certainly bargain hard, but I suspect most people getting repairs done here have older devices, where the costs can be as little as HG$230 (US$29) for a broken digitizer on an iPhone 4S.

Of course, you don’t know what you’re getting from the unofficial stalls. The chances are high that the replacement parts used have never been anywhere near Apple, but some of the stalls claim they source parts from Apple’s own suppliers. Whether that’s true, or they are close and functional copies, is an unknown, but certainly examples of repairs I saw in progress looked indistinguishable from the real thing.

Would I risk it personally? Definitely not – but I have the luxury of being able to pay Apple’s prices if I need to. Not everyone can, and I’m sure that there are a great many devices repaired here which would otherwise be landfill.

A local friend did warn me that this is not the only area where the stalls can be sketchy.

I got my screen repaired there and it promptly came apart again two weeks later. When I later took it to Apple, they said the serial number of my phone had turned up in Singapore and that a common trick is to take fake iPhones with real serial number for repairs and then get them replaced when they don’t work!

Neither of us could figure out how an Apple Store technician wouldn’t recognize a fake iPhone, but it’s not the first time I’ve heard of this happening.

While repairs may be a gamble, a third-party case or Watch strap represents little risk. Not quite zero, as a poorly-made case could conceivably scratch your phone, and a poor quality Watch strap could perhaps come undone, letting your Watch fall to the floor, but I’d say the chances are low. I picked up quite a few products, and the manufacturing quality looked fine, even if many accessories did have a cheap appearance.

There’s certainly no shortage of choice. 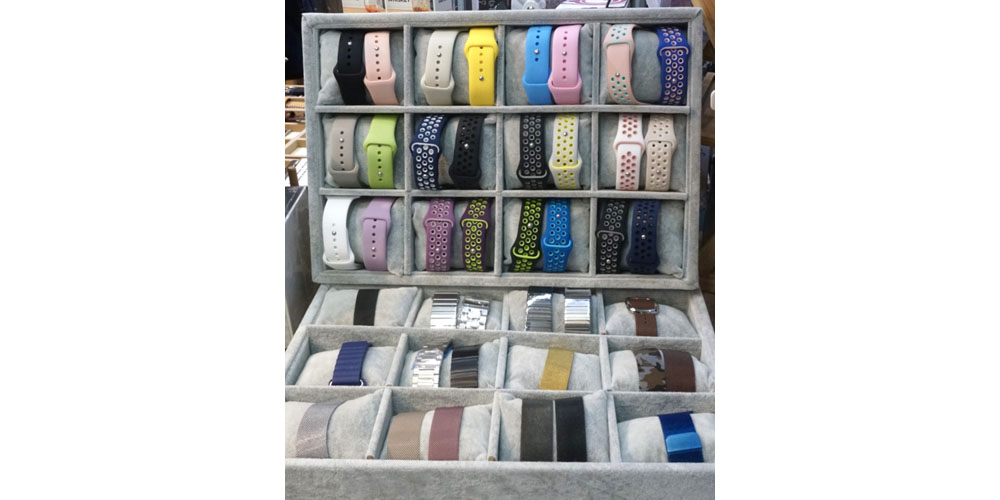 You can even get, uh, ‘Swiss quality’ fake Apple Watch bands …

You can also buy Macs, iPhones and iPads here. Again, the risk of ending up with a counterfeit device can’t be ruled out, but the knock-offs found in mainland China tend to be easily identified as Android devices with iOS-like skins, and I didn’t see any of these here. Whether the device you’re buying has all-genuine components inside is another matter, of course. 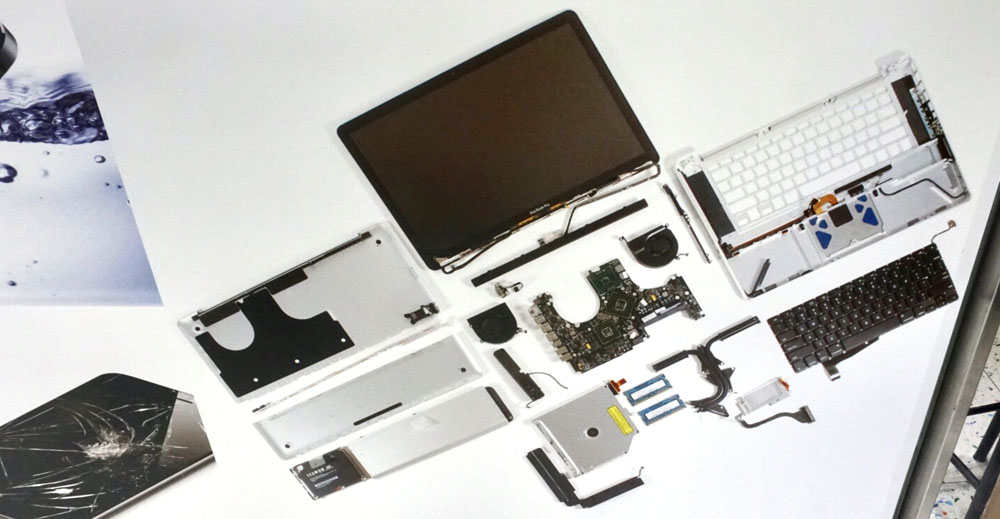 Likewise with other high-end branded products, like DJI drones and Nikon & Canon cameras and lenses. I wouldn’t necessarily trust that the devices are completely as manufactured, and to be honest the asking prices were only about 10% below the retail price. For that, it doesn’t strike me as a risk worth taking, though I’m sure some negotiating would see the price fall.

Then there are the devices I wouldn’t touch if you paid me. Mac power bricks, USB keys, cables, and so on. Way too much risk of getting a counterfeit product that could damage your Mac.

But if I knew someone locally with a broken device that couldn’t afford to get repaired at Apple rates, I’d have little hesitation in pointing them to the Wanchai market. It may or may not be 100% genuine Apple parts inside, but I know people who’ve been completely satisfied with the repairs, and if the alternative is binning the device, there’s really nothing to lose.

If you find yourself in Hong Kong and want to visit, take the MTR to Wanchai and then ask – it’s a rather discreet entrance next to a McDonalds: 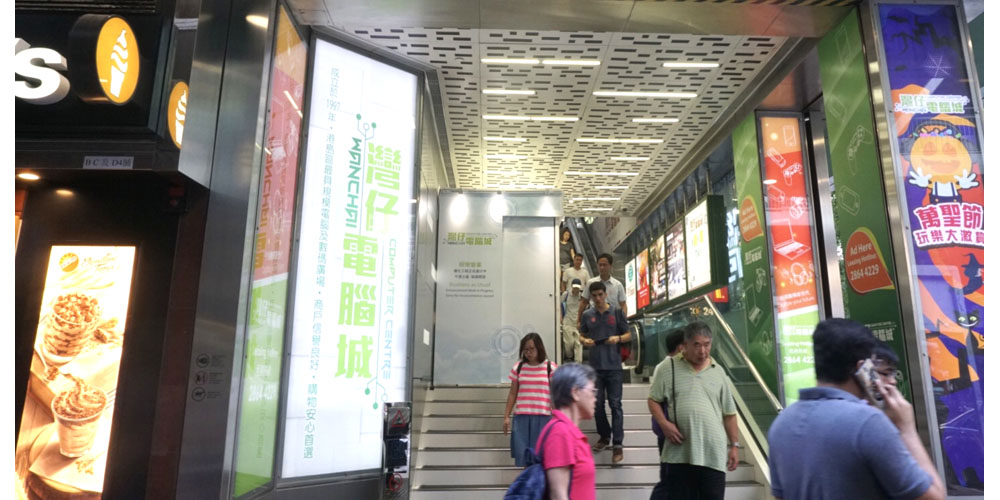 I personally didn’t buy anything, but it’s definitely a fun place to wander around.