Data from Mixpanel indicates that sales of this year’s flagship iPhone X quickly overtook both the iPhone 8 and the iPhone 8 Plus, but not the two combined.

Using analytics data captured from apps that use Mixpanel’s software developer kit, the firm was able to see that the iPhone X now makes up 4.76% of all iPhone users. This puts it ahead of the iPhone 8 Plus at 3.59% …

The iPhone 8 is further behind, at 2.78%. However, combine both iPhone 8 models and the cheaper handsets still have the edge, with a combined penetration of 6.37%.

Unsurprisingly, the biggest proportion of iPhones out there are older models, most people now holding onto their phones for an average of around 2.5 years before selling them or passing them on to other family members, where they remain in use.

Business Insider notes that this year’s models combined look set to overtake the iPhone 7 Plus within the next few months, and the smaller, but slightly more popular, iPhone 7 soon afterwards. 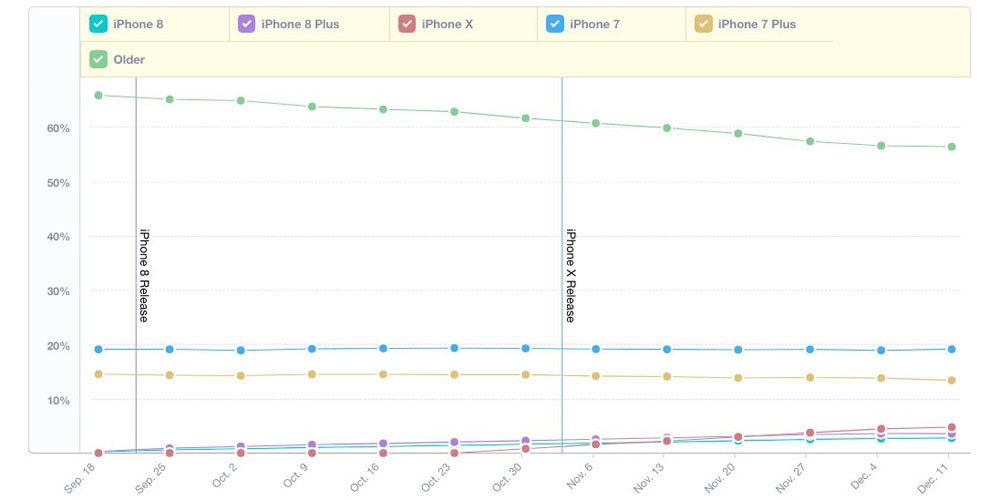 Apple never reveals the breakdown of iPhone sales, leaving us to rely on proxies like channel sales and analytics data from apps and websites.