Review: Modsy – the (relatively) affordable AR-inspired alternative to your own interior design consultant

Even when moving home is for all the right reasons, it still has to count as one of life’s most mixed experiences. While the end result is hopefully a better home in a better location, the process also involves a great deal of stress, work and expense. In the case of our own recent move, we can tick all five boxes …

But one of the fun parts is the chance to start again with a blank sheet in terms of designing your home the way you’d like it to be. For most of us, that’s a DIY process. We look for inspiration online and in stores, then sit down at the computer – or pencil and paper – to play with ideas.

The posher approach is to hire an interior designer to do it all for you. You tell them your tastes, and what you’re looking to achieve, and let them come up with designs. You then say yes or no to the various elements, and they rework the designs until you end up with a final one you approve …

But interior designers – and the products they recommend – don’t come cheap. Which is why Modsy came up with a third option. An augmented reality approach which combines human and app-based elements to provide a relatively affordable interior design service.

The emphasis is on making the process as easy as possible for you, while still coming up with designs and product suggestions which will be a good match for your tastes – and allowing you to adapt them as you wish.

The products recommended are sourced from more than 100 retailers across a range of price points, including West Elm, Target, CB2, Crate & Barrel and Wayfair. Modsy gets a commission on products bought through the platform, which allows it to offset some of the costs of creating your designs.

One thing to clarify at the outset is that while Modsy is AR-inspired – you see real products in a virtual version of your own home – the output is a 360-degree render on the web.

That sounds a little less exciting than viewing AR output in real-time on your iPhone or iPad, but is actually far more usable unless you’re standing in an empty room. A real-time render would be hindered by all your existing furniture: this one converts a cluttered room into an empty one before it begins.

Modsy needs three things from you:

The good news about the photos is you don’t need to shift furniture around. All you do is take eight photos – one of each wall, and one from each corner – and Modsy will be able to virtually remove everything in the room to create a 3D render of the empty space.

The platform then uses a mix of human designers and automation to come up with two different designs. The standard service – which costs $69 per room – allows one Modsy revision to the design based on your feedback, then you can use the software to make unlimited revisions yourself. This includes both adjusting layouts and swapping furniture.

If you want more help than this, increasing the fee to $199 per room gets you unlimited Modsy revisions, as well as access to a dedicated designer via phone, chat or video. But unless you need a lot of input, I think the $69 option would suit most people – half the fun is playing around with the designs yourself, moving and replacing items to see how they look.

You start by answering five questions. Each of these is multi-choice, and each has an ‘other’ option if none of the standard ones apply. 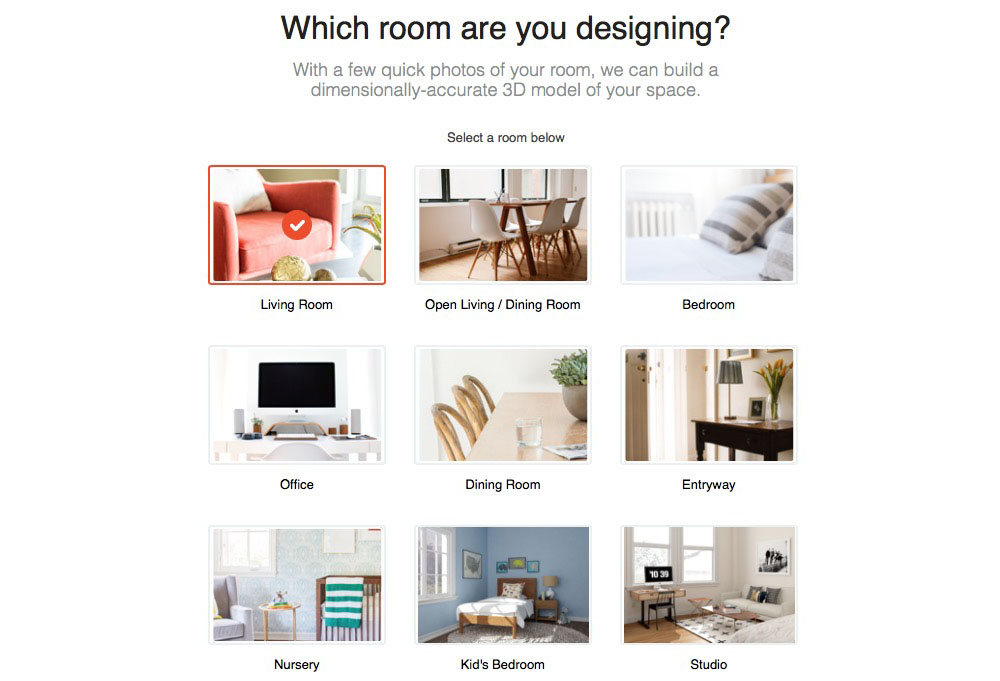 Second, the reason for the redesign:

Third, where you are in the project, from ‘starting from scratch’ to ‘looking for finishing touches.’ 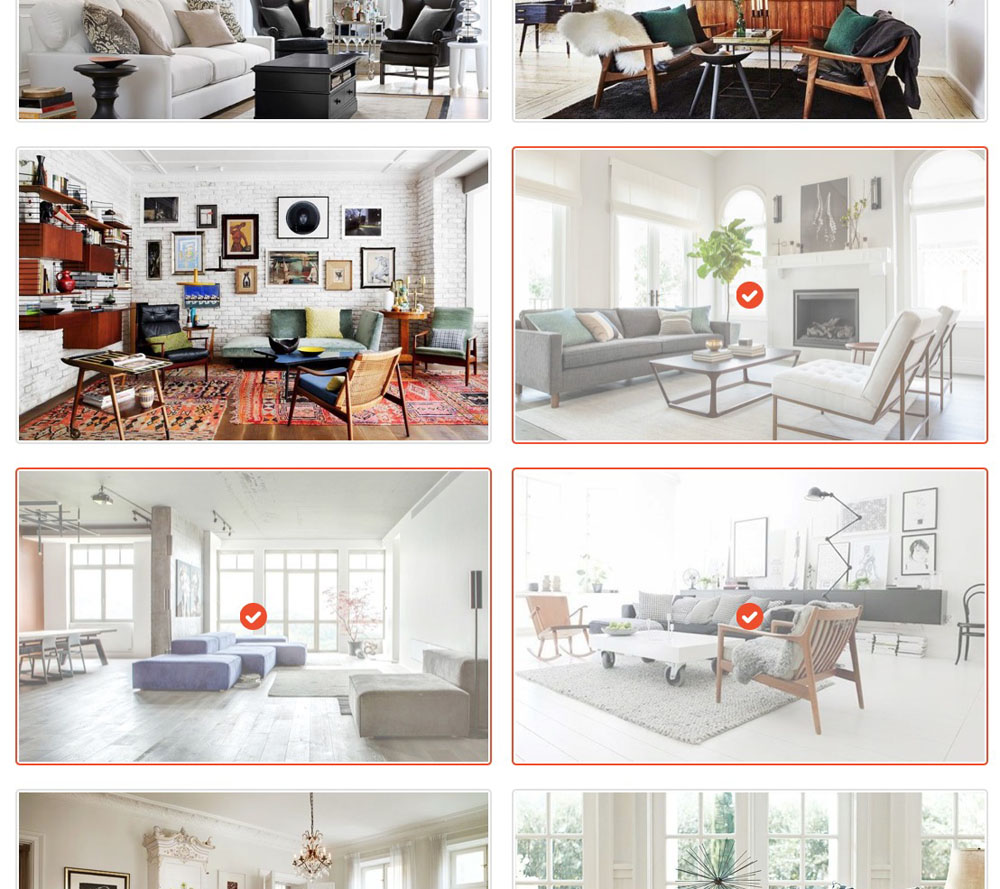 Modsy’s analysis of this was ‘you’re drawn to comfortable and minimal, modern and Scandinavian spaces’ which struck me as a good assessment. It then presents some sample furniture that matches those styles, and asks you to love/hate/ignore each item.

This further impressed me, as several of the items it showed us were similar to things we already owned or had on our wish-list. In total, it showed us 36 products across three different room looks. For example: 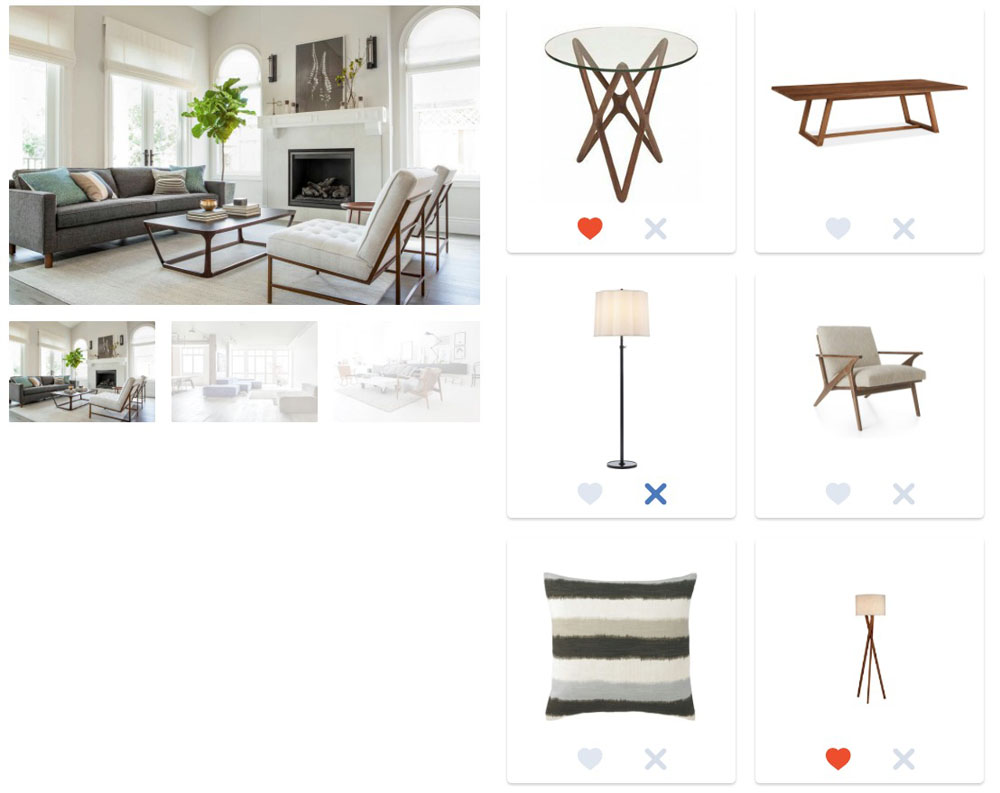 You dig a retro look almost as much as you crave a clean space. Sleek forms and modern styling are your weakness. You thrive in monochromatic spaces and can easily imagine yourself seated on an iconic piece such as an Eames lounge or Barcelona chair.

Mod Visionary combines Minimalist and Mid-Century Modern with a touch of Transitional.

All of which was an excellent assessment. If you are less convinced by yours, you have the opportunity to retake the quiz as many times as you like, and can also email Modsy with feedback and more specific pointers.

Because there’s a human element to the designs, it takes a few days for Modsy to email you the link to your designs. You get multiple angles, including close-ups and an overhead view. Here’s one of ours, starting with the living-room end of the combined living space: 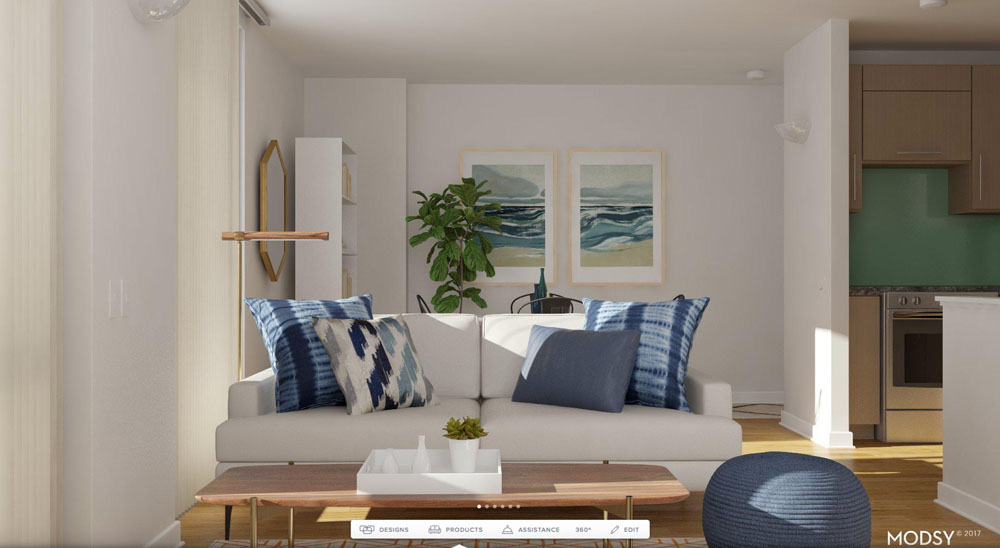 The first thing that wowed me was how accurate the 3D space was, and how well it had transformed photos taken just after we moved in – with stuff dumped rather randomly, and boxes in abundance – into a clean space ready for refurnishing.

Second, by how well they’d captured our tastes. While none of the individual furniture pieces really grabbed us, the overall look & feel was really good.

The next render shows the dining end of the room: 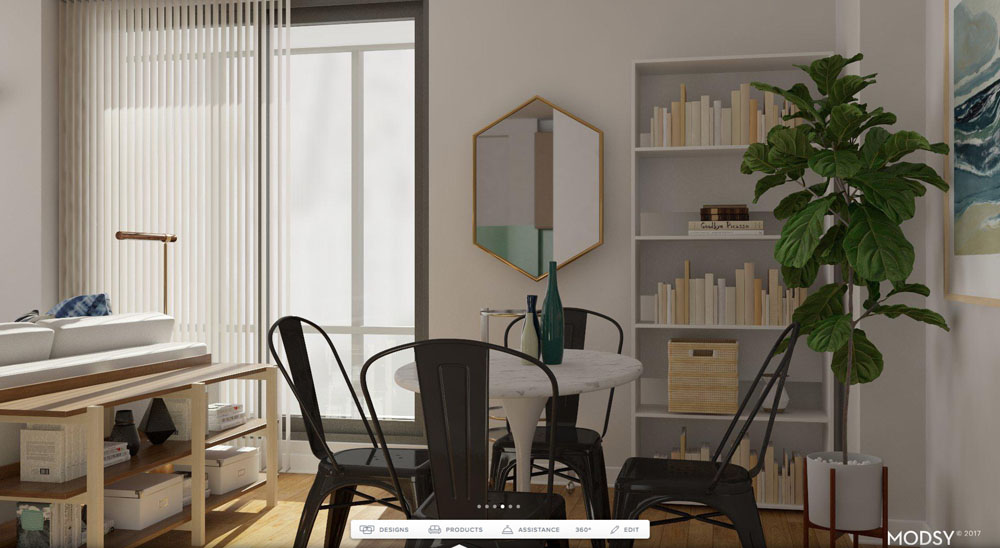 And another angle on it here: 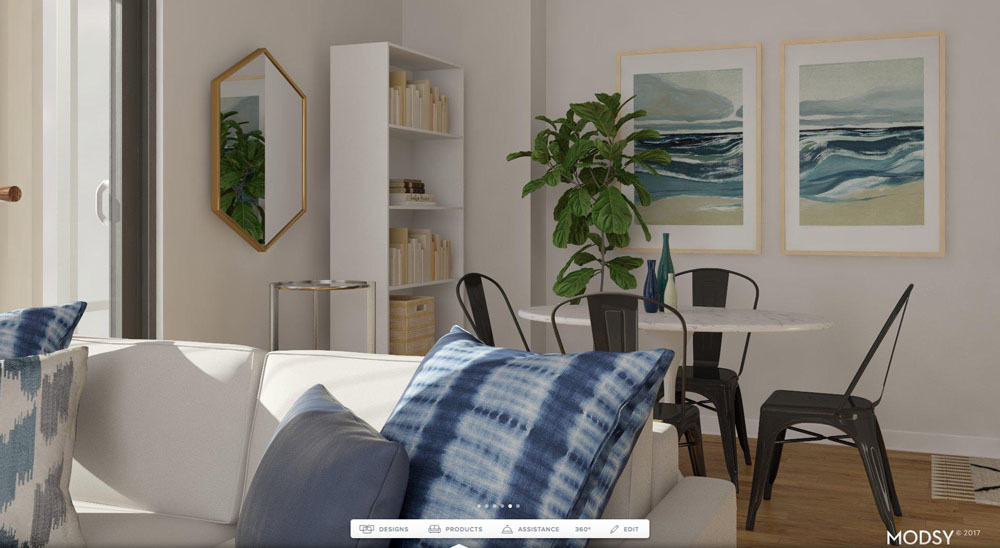 The images are clearly renders – they aren’t quite photorealistic – but the way that light is captured does give them a realistic feel, and we both felt that they really captured the room accurately.

You also get a plan view: 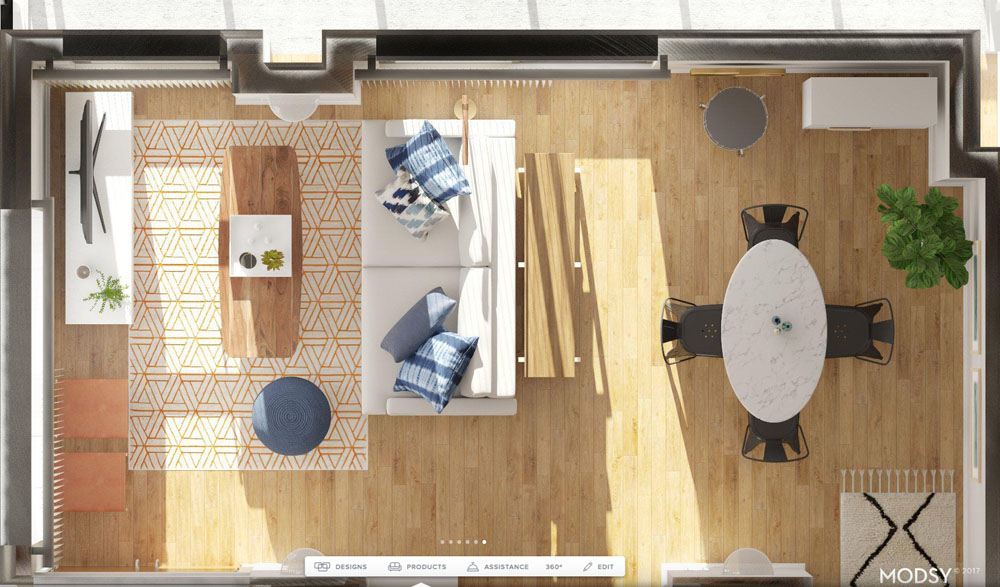 Now, I have to admit that just after moving – with a billion things on my to-do list – wasn’t the ideal time to do this, so we didn’t take the time we should have to brief Modsy’s designer on this room. If we had, we’d have been sure to mention that we don’t have a television, and do have a great many books – both of which would have been factored into the design.

But even without this input, we felt that the work done by Modsy was really helpful. Most especially by the fact that it provided a completely fresh look at the space.

Once you’ve got an initial feel for the design through the supplied renders, you can enter the 360 view and look at it from any angle. 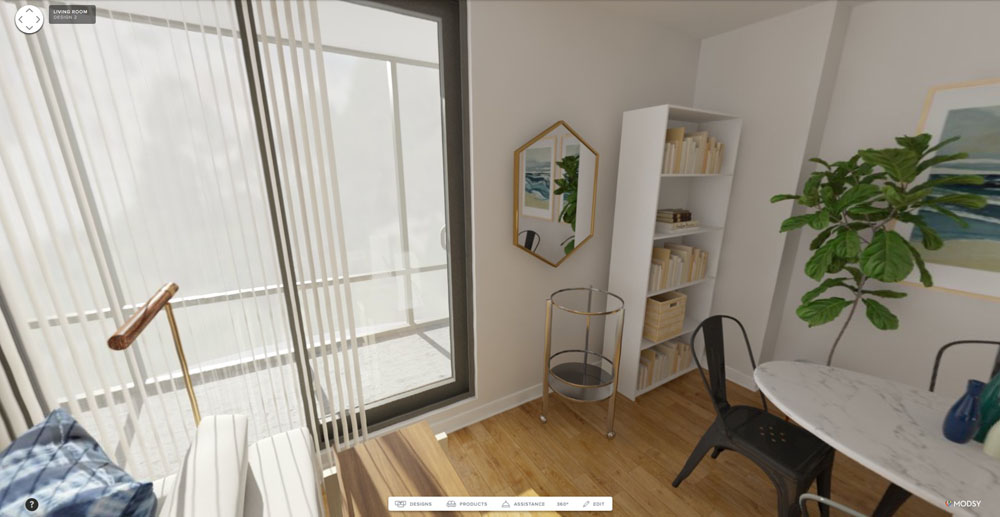 To make changes, you select edit mode. You can then move and rotate objects: 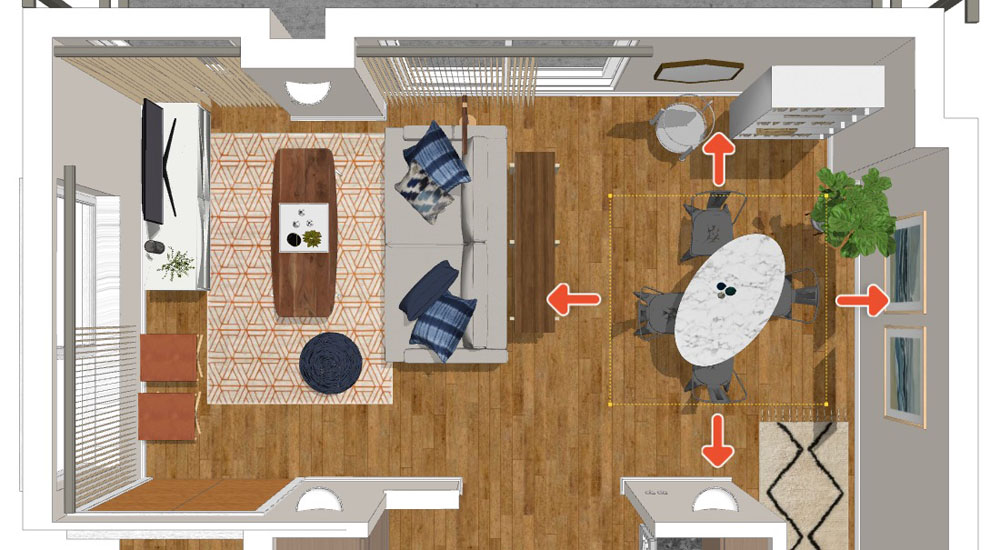 You can also delete or replace items:

I found it took very little time to get used to it, and it was then very easy to use.

I’m impressed. Given a remarkably short Style Quiz, I felt Modsy did incredibly well in identifying our tastes, and in showing us a good proportion of products to match those tastes.

The 3D rendering of the room cannot be faulted: it felt both 100% accurate, and gave a good sense of the room. In particular, accurate capturing of the light really helped make it feel real.

Of the two suggested designs, one was better than the other, but both were well put together, and a good reflection of the overall look-and-feel we like.

The one area where I think Modsy may stumble is in the selection of specific products. As the company gets a commission on each item bought through the platform, it obviously hopes you’ll make a number of purchases to supplement the fee charged.

Given that the retail stores are American, and we’re in the UK, this wasn’t something I could realistically test, but my view is that most of us probably have two or three furniture stores we particularly like, and where we end up buying most of our stuff.

You can brief Modsy’s designers to use only your preferred stores, so if your preferred brands are on Modsy’s roster, then it really could be the complete design-to-purchase experience it hopes to be. If not, I still think there’s enough variety in the products on offer that it’s a great inspirational and planning tool. At $69/room, I think it’s decent value if you’re looking at a significant redesign.