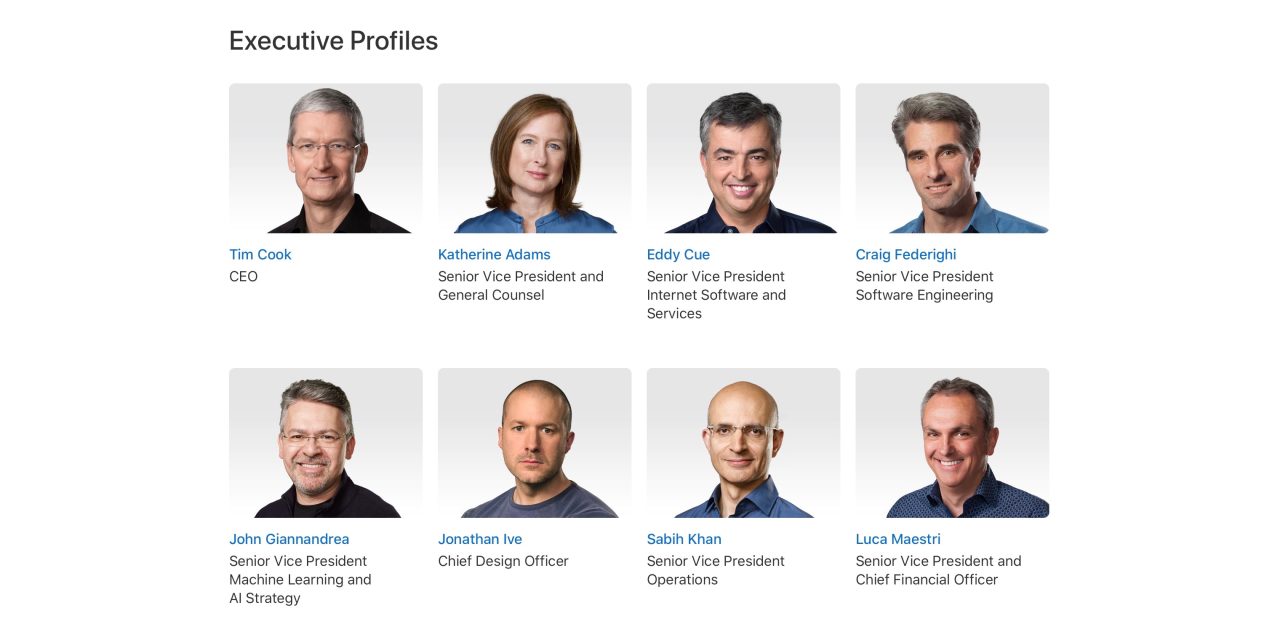 A new report from The Information takes a look at some of the changes that Apple’s leadership has undergone over the last few years, the company’s employee growth, and how that’s spread the executive team thinner than ever. Notably, a former Apple executive believes that the current leadership structure “doesn’t look particularly effective.”

The report highlights that as Apple executives like Angela Ahrendts and Jony Ive have left (or will leave soon), those taking their responsibilities are assuming larger workloads with more direct reports.

What becomes clear is how the number of people reporting directly to Apple’s 20 or so top managers—those who report to Cook—has exploded over the years as Apple’s workforce has grown sharply. For instance, after retail chief Angela Ahrendts left in April, human resources head Dierdre O’Brien, a longtime Apple executive close Cook, added retail to her responsibilities. By absorbing all of former Ahrendts’ direct reports, O’Brien now has 23 direct reports—more than any other executive at the upper level of  the company. Similarly, COO Jeff Williams is absorbing the design team previously run by Jony Ive, adding two more direct reports to his existing eight.

And when compared to other major tech companies like Microsoft, Apple has far fewer senior managers.

Apple’s senior management layer is smaller than that of other big tech companies, at least based on what it discloses to the U.S. government. Apple had only 115 executives in the U.S. who reported either to Cook or to one of Cook’s direct subordinates, out of a U.S. workforce of almost 84,000, as of December 2017, it disclosed in a federally mandated employment survey. By comparison, Microsoft had 546 executives in the same classification overseeing 74,000 employees during the same period. While these companies might have a few senior executives stationed overseas, the vast majority are likely to be based in the U.S. (Our org chart shows a higher number than the 115 because it includes executives who are based overseas and is also more current.)

Former Apple employees speaking to The Information said that Apple’s leadership structure is a holdover from Steve Jobs that allowed the company to be fast and nimble.

Some former Apple employees say the relatively small size of the senior management layer is a legacy of Steve Jobs, who on his return to Apple in 1997 simplified the management structure to allow for quick decision-making. Jobs could discuss and make decisions with as few as 10 people in a room. His structure allowed him to skip levels and communicate with people under his direct reports, according to one former Apple executive.

But with the company growing year after year and plans to add 20,000 jobs in the US by 2023, one former Apple exec believes that the current executive structure isn’t a good fit for the future.

But right now, “it looks like the senior vice presidents have way too many reports … it doesn’t look particularly effective,” the former Apple executive said, referring to the title held by most of Cook’s direct reports.

Check out the full report from The Information for a detailed Apple organization chart, more details on the changes Apple’s leadership has seen recently, and more.