As people adjust to shelter in place orders around the world due to the coronavirus pandemic, new behaviors are impacting almost every industry and that includes podcasts. While at first, you might think podcast listener numbers would be up with the extra time many people have on hand, it’s actually the opposite, here’s why.

Reported by The New Consumer, in the US, podcast audiences are down 10% over the last two weeks according to data from Podtrac. While that might sound strange considering that many people have a lot more free time with shelter in place orders, what is likely happening here is that normal routines like listening to podcasts on the commute to work isn’t happening as day-to-day routines have been disrupted.

Further backing up that notion, Marco Arment shared that listenership was down through his Overcast podcast player during the week by 20% but that weekend numbers haven’t changed.

The New Consumer notes that for the year, news podcasts have grown alongside the pandemic while genres like comedy, sports, society and culture, and true crime have dipped.

We’ve still been putting out regular episodes of our shows here at 9to5Mac as have our sister-sites, so be sure to check out the latest if your listening routine has been interrupted over the last few weeks.

Other podcasts on the network: 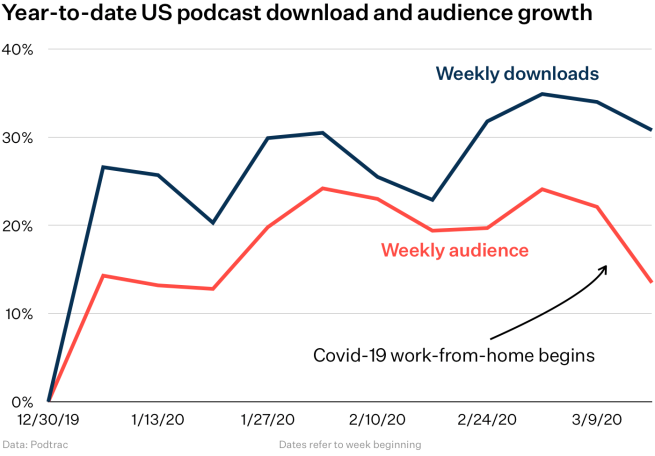