Connected Data has announced the third generation version of its 4-bay Drobo storage array. A completely new architecture along with USB 3.0 connectivity help make it “three times faster than the previous generation.” Speed is always a welcome upgrade, but the real crowd-pleaser in this announcement is that its MSRP has been chopped to $349, and previous generation Drobo owners are eligible for a $50 customer loyalty discount.

Current Drobo owners will find it easy to migrate their data to the new system because it’s also built on BeyondRAID technology:

The foundation that allows first and second generation Drobo customers to seamlessly upgrade to a new Drobo by simply removing the disk pack from their current Drobo, and moving it to their new one.

It also offers Apple users an easy way to limit the amount of space available to Time Machine. This prevents OS X from storing extremely old backups because it thinks it has access to the entire drive.

If you are in the market for some serious storage we recommend checking out Synology as we have had nothing but wonderful experiences with them.

The third generation Drobo is now available for preorder with an anticipated ship date of late April.

I’m not going to lie: I’ve heard enough Drobo horror stories to steer clear of its products for a while now. However, it seems to be doing well with its “Bring your own storage” model, and the products are rated well on Amazon, so the company must be doing something right. Today, Drobo announced a new Thunderbolt product, the 5D, with some serious specs:

Drobo 5D is equipped with dual Thunderbolt ports for daisy chaining. Connect up to six Thunderbolt devices and/or a non-Thunderbolt monitor at the end of the chain. With six Drobo 5D arrays in a chain, you can have up to 96 TB of usable capacity. And, the bi-directional 10 Gbps performance of Thunderbolt allows all devices in the chain to achieve maximum throughput.

Interestingly, the 5D and Mini have a battery backup to safely shutdown the device and an mSATA add-on that purports to increase performance:

Data-Aware Tiering technology, usually reserved for business-class storage solutions, is also available in this desktop Drobo. It intelligently uses the high-performance flash in SSDs to accelerate performance of the storage array, allowing applications such as Adobe Premiere and Apple Aperture fast access to data. To keep capacity of the Drobo at a maximum, the Drobo Accelerator Bay accepts an industry-standard mSATA SSD, leaving all five 3.5” drives bays available for high-capacity HDDs.

If getting the fastest performance possible is your thing, you can also load up every drive bay with SSDs. Drobo gives you the flexibility to choose.

For my money, I much prefer Network Attached Storage, which admittedly moves at a slower 1Gbps. Drobo offers solutions in this area but I am currently using and loving my Synology Diskstation that resides in my closet instead of my desk. It has not been anything but reliable for months (expect a review soon). 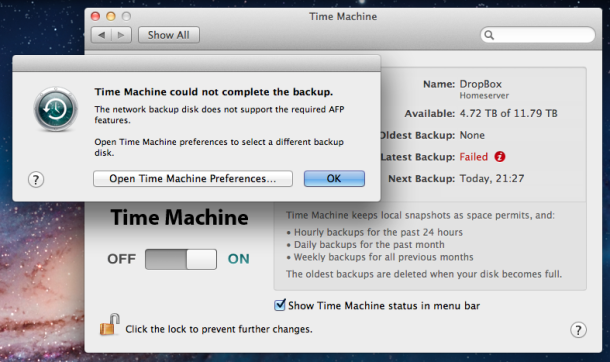 CNet has discovered that OS X Lion users lose support for Time Machine backups with third-party NAS hard drives. Time Machine in OS X Lion is now only compatible with Netatalk 2.0. This means that third-party NAS (network attached storage) drives will need a software upgrade from their respective manufactures in order to work with Apple’s next-generation Mac operating system. Users of cable-connected external hard drives will not be affected. Drobo, the company behind popular network attached storage devices has noted the issues on their website:

The next official firmware release for all “FS” products will ensure full compatibility with the released version of Mac OS X Lion,  including use of Time Machine.

Another popular NAS drive maker, Synology, has already released a fix in beta form. Other NAS drive makers will likely follow up with their own OS X Lion compatibility updates.