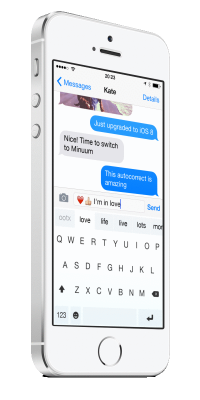 Minuum, which has existed on Android for a while now, has announced that it is bringing its custom keyboard  to the iPhone with iOS 8. Minuum is trying to stand out from the crowd with a particularly novel gimmick — you can change the height of the keyboard to save space or expand it to return to a familiar QWERTY layout.

In the mini-mode, keys bunch into groups of three. An autocorrection system then picks what word you meant to chose out of the possible options, similar to the word prediction systems of Fleksy and other custom keyboards.

How well applications will respond to the dynamically changing height is yet to be seen, as many apps in the store have been coded assuming fixed screen sizes. Over time, though, as developers update their apps, these issues should go away.