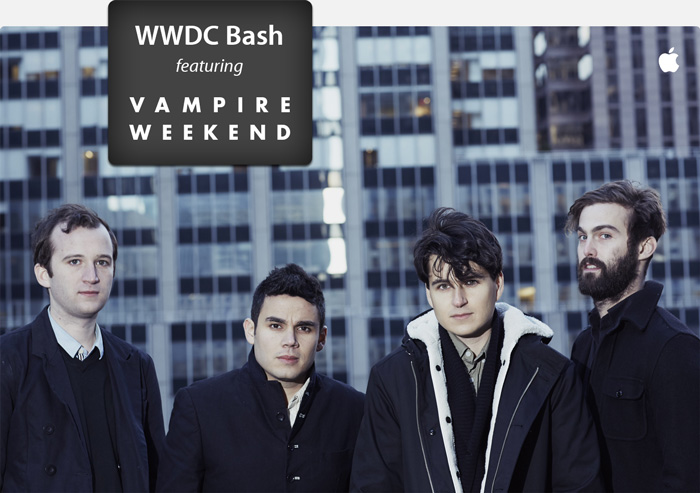 Vampire Weekend will perform for WWDC attendees this year.

Weeks after Modern Vampires of the City was featured on iTunes as a free stream ahead of its release date, Vampire Weekend has been officially announced to perform tomorrow night at WWDC Bash for conference attendees.

Here’s one great reason to give your Mac the night off. Vampire Weekend will perform at Thursday night’s WWDC Bash. The party starts at 6:00 p.m. at Yerba Buena Gardens.

Vampire Weekend has been tapped by Apple in the past starting with WWDC 2010 when Apple played “California English” and “Giving Up The Gun” as well as “Oxford Comma” in between sessions. “Holiday” was featured in between sessions in 2011.

WWDC attendees will be able to download two Vampire Weekend songs from iTunes ahead of the WWDC Bash. If you can’t make it to WWDC Bash, you can still enjoy the fun by checking out Vampire Weekend’s new album on iTunes… or casually FaceTime call an attendee at just the right moment.

@faitherina I’m very surprised you haven’t started asking for a 2-hour FaceTime call from one of us tomorrow night.