Apple Minion's Reviews of iPhone are Out (of touch) 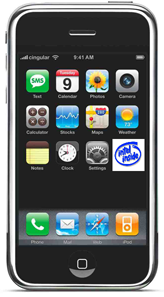 Not surprisingly, the big four non-Apple civilians who had been given iPhones to play with (and had signed their life away in NDAs) finally showed their cards ahead of the rest of the media yesterday. Also, not a surprise to anyone, they loved it almost unconditionally.  How does the public let Apple get away with this round robin “give us good reviews and you get our newest product early, bad reviews and we give our new products to your competitors” game?  “Freedom of the press and Democracy Inaction” as the Daily Show would say…so here they are, your unbiased reviews:

They really all just wrote the same review – what is on Apple’s PR website plus:

What is most frustrating about these reviews is the lack of any coverage of the most “Game-Changing” part of the phone. The “Lock-in“.

Why would Apple want to lock you into one particular phone company?  What’s the advantage?  Besides the need to create a CDMA version of the iPhone, not much.  Visual voicemail on T-Mobile?  I am sure it’s not that hard, especially the second time around.   The iTunes registration?  Not much there either.

Why not sell it direct like Nokia is doing with their very capable N95 phone in the US?  More customer base, more options, equals more sales – right?  Why would Apple choose to follow the super lock-in model that T-Mobile has built around the Sidekick – (which relies on 3rd party Danger server but despite the lock-in has had considerable success?)  Maybe, like me, Steve Jobs is super-pissed that he can’t take his Sidekick 3 overseas and use another carrier – even if just for phone and SMSing.   Probably not…in fact, if the Apple people knew this frustration and hate, they would not voluntarily, and without any benefit, lock in their customers to one carrier.

Apple isn’t such a control freak that it would give up customer experience, sales and exposure – all for control..

…well maybe it is.

Because Apple has to be taking some of the monthly customer payment cut.  There is no other logical explanation for why Apple would choose to lock itself in with AT&T.  Now how much?  Probably not a lot.  Maybe $5-10/month.  Maybe a bit more on the SMS plans – otherwise why only 200 SMS messages and no iChat?  But multiply that little amount times 10 million customers and 24 months and you’ve got a pretty healthy chunk of change – not many companies would scoff at a quarter of a billion dollars or more.  Apple has had a taste of the economics of scale from the iTunes store, which besides Apple’s stated best intentions to only make money on iPods, is turning a healthy profit.  Go MBA’s!

For instance if Apple makes 1 cent on each of the 10 billion itunes songs sold through iTunes, that is $100 million.  If they make 10 cents, that is a billion dollars.  Economics of scale are nice when you have a large marketshare, aren’t they Apple?

It is also the reason Apple is having a very difficult time finding a partner in Europe.  They say “Arrogance” is the reason why no one wants to deal with Apple.  This is business…5-10