On the 10th anniversary of Bill Gates’ appearance at Macworld in Boston (On the huge Orwellian 1984 screen behind a presenting Steve Jobs), Apple plans on finally unveiling the upgraded iMacs that were originally slated for release during WWDC 2007. It is not known, (outside of Apple of course) if this date was chosen for any historical significance. Additionally, many sources have indicated that new Video iPods will also be announced. This is obviously timed in conjunction with the incredibly important back-to-school shopping season.

What seems to be known about the iMacs is that they will support a brand new metal enclosure which is much more sleek (under 2 inches thick) than the previous revision and lose much of their “chin”. Contrary to popular belief (that the 17 inch version was a goner) they will be available in 17, 20 and 24 inch varieties. The keyboard is also redesigned to be much more mobile and gain additional media controlling functionality (remote control anyone?) – oh and it is RAZOR thin. This will be something designed more for the living room or family room (or bedroom or dorm room) than the office. It would also make sense that Apple would include the fastest processor available in an enclosure this small – likely Intel’s new Core 2 Extreme Mobile that was just announced. It would further make sense that some form of High Definition optical disk technology (HD-DVD or Blue Ray) will be included, however, these details can’t be confirmed.
Read on for more info…. 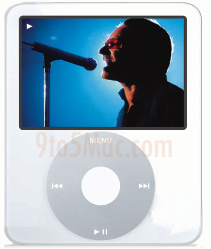 Also arriving on or around August 7th will most likely be the next revision of the video iPods. Sources indicate that these video iPods will have an almost one inch shorter appearance than current models – which account for the removal of the regions between the click wheel and the screen and the click wheel and the bottom of the iPod. A mock up is pictured at the right. ——>

Some sources have also indicated that the Black Matte version of the Video iPod will also be “less shiny and more MacBooky”.

The Nano line is also due for a revision update sometime in the near future (the current Nano back to school promotion ends Sept 16th?) Details are still emerging about how much functionality the new devices will have but the new aspect ratio would seem to indicate that these devices will have the ability to play video. The storage of the devices is not known but bumping them up to sizes larger than the iPhone (16GB?) might be a psychological barrier that Apple doesn’t want to break.

For a release of this magnitude, Apple usually holds an event. No announcements have been made as of yet, but if there is an event, we can pretty much promise that Bill Gates won’t be showing up.

Edit: Hilarious comments. We take a design award winning 5.5G iPod, stretch it out just a bit (bigger screen) and eliminate the wasted spaces between the scroll wheel and the screen and the scroll wheel and the bottom. In Photoshop. Nothing else was touched. Now it is “burning people’s eyes out”.
So (design award winner) + bigger screen – wasted space = monstrosity.
Also, for the people who are losing their mind about the dock size change. I am sure apple will sell a 30 cent adapter (with a $10 markup) so that you won’t have to replace your precious Colby iPod dock.
EDIT EDIT One of our readers, Paul Ainsworth, has sent a much better mockup than my handywork…take a gander: