Perhaps Steve Jobs is right? He’s been right before…actually a few times come to think of it… 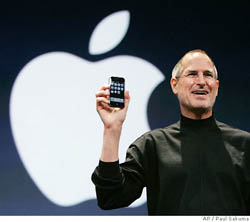 Steve Jobs told Apple employees before the introduction of the iPhone that they will get to tell their children and their children’s children that they worked (long and hard) on a device that will go down in history as one of the milestones in technology evolution – then he hooked them all up with an iPhone.

You have to admit, he might be right – as well as generous.  And this isn’t just pure fanboyism talking.  Although that makes it all the easier.   What has changed in less than a month since the iPhone has been released?  Everything.

Phones are no longer phones.  They are computers. Of course they were always mini computers but now they are thought of differently.  Some of these computers are better than others.  The iPhone, though it does have tons of well publicized shortcomings, is far and away the best phone/computer that has ever been made.  There is nothing in its league.

But was it even Apple’s choice to go out and develop this whole new platform? Was this a natural evolution from the computer business or was it something that required a swift turn of the captain’s wheel – one like Bill Gates is famous for making at Microsoft when it became obvious to him that the Internet was, well, everything. It is apparent that at some point, the Apple management team said, “This laptop/desktop paradigm isn’t going to be around forever, we need to be working on the next big thing.” Add to that the landscape of seeing the success of mobile devices like the Blackberry and Sidekick which were starting to take away some of the roles of computers. Then throw in the proliferation of high speed wireless networks that are only going to become cheaper, faster and cover more ground. Finally, products like Nokia’s and Microsoft’s Tablet then UMPC’s start littering the landscape. What you have there is a recipe for change.

That’s all for now – continued soon!