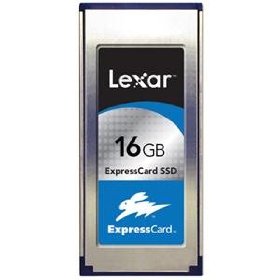 So there is a bit of a quiet revolution going on in the computer world lately. Solid State drives (drives is a legacy term that needs to go – it is not a drive at all) have been coming way down in price over the past few years to the point where they may actually make sense for some normal power users.  Now I am not saying that you should take out your current hard drive and replace it with something marginally faster and about 10 times the price in terms of Gb/$.  That isn’t fun.

Yes, MacBook hard drives are easy to replace, but,  last time I checked, it wasn’t that much fun to take the hard drive out of a MacBook Pro.  Plus that is kinda pricey.

So what I decided to do is get a Lexar Solid State Express Card from Amazon.   They happened to be having a sale on the largest current available size – 16Gb and I got it for $199.

They also have an 8GB version for about $100 for the lower budget minded.  Word on the street is that there is soon to be a 32GB version which should clock in at a relatively reasonable $400ish.

The first thing I did after inserting the Expresscard  was open Disk Utility and reformat it to HFS+ format (it came in Fat32).  I then did a disk image of Leopard boot disk which is about 8GB.  It only took a few minutes until it was done and popped up on my desktop just like any other drive would do.   I then went to the Startup disk system preference and chose the Express card partition.  Finally, I restarted.  So started the fun things you can do with an Expresscard:

Whatever the case these little guys are sure to be valuable, and could possibly be the next big thing...Here’s a link to Amazon’s store where I picked up my card which was very well priced.