AT&T rolling out much more 3G goodness. Guess which device stands to benefit? 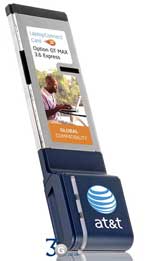 Yeah the rest of the world is rolling their collective eyes because they’ve had 3G for like 35 years or something… but AT&T has just announced a major expansion of their 3G network in the US.  Their announcement  means AT&T will roll out an additional 1,500 cell sites in the U.S. this year adding 80 more cities – which will bring the total to 350 markets in the US – and all of the top 100 cities.   Just about ubiquitous enough for Apple to do some kind of 3G deal with AT&T, not just in iPhone, but also in iPod, and Mac laptops as well.

We are still sticking to our Mayish prediction of iPhone3G rollout – about a year after the the original announcement.  Also, this is about the timewhen Japan, who’s networks aren’t compatible with EDGE, and the rest of Asia should start seeing the iPhone.  Also expect the EDGE iPhones to take two price cuts of $100 each before then.  One to eliminate the 8Gb iPhone in 1-2 months.  Another for when the 3G model comes out to clear the EDGE iPhone inventory.  Apple isn’t doing $200 price drops anymore.

As far as we know Apple is also sticking with their exclusivity agreement with AT&T and not going anywhere else.

The talking heads at AT&T have this to say about catching the US up to Europe and Asia’s networks (take it for what it is worth):

"Fast wireless broadband is the foundation for a whole range of new and emerging applications that our customers are adopting, including everything from social networking to sending live video and large business files," said Ralph de la Vega, president and CEO for AT&T’s wireless unit. "With these aggressive initiatives, we’re expanding the scope and the speed of our 3G capabilities, connecting people with their world and enabling more customers to do more with their wireless devices, wherever they may be.

"We’re also planning for the future by establishing a clear path to a 4G network that will meet the needs of our customers for years to come," said de la Vega.

The deployment of HSUPA this year is the next step in the evolution of AT&T’s 3G network, with further enhancements and speed boosts expected in the near future. This year’s HSUPA deployment will complete the transition of the AT&T 3G network to High Speed Packet Access (HSPA) standards, marking the only full transition by any wireless provider in the United States to this latest generation of wireless broadband capabilities.

"From the beginning, our wireless network has been designed with the future in mind," said de la Vega. "The capabilities of 3G standards will continue to expand over the next several years, enabling us to stay well ahead of our customers’ broadband needs. And looking even further into the future, our existing technologies provide the ideal platform for a smooth transition to next-generation platforms."

AT&T’s GSM technology also offers customers the largest international roaming footprint. AT&T devices work in 196 countries and regions — accounting for more than 90 percent of the planet. All GSM customers in those countries can roam on the AT&T network in the United States as well.