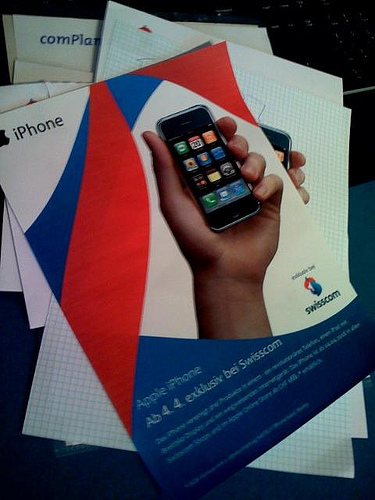 As Apple prepares for its iPhone announcement this week, the company appears close to inking deals to introduce its product across many additional European territories.

iPhone is presently only available in the UK, France and Germany; now the company is nearing deals to offer it in the Netherlands, Belgium, Switzerland, Austria, Ireland (done), Italy and Spain – even the Nordics might get some love.  Lithuania and Denmark? sure!

Fresh reports claim the iPhone will launch in Switzerland on April 4. The Apple device will be made available exclusively from Swisscom.  Keep in mind, Hardmac had a very similar (actually much better) fake last time.

Benoit Scheen, chief of Belgian’s second-largest mobile network Mobistar, last month said he hoped to reach a distribution deal with Apple for iPhone distribution this year. Next door in the Netherlands, KPN has recently been identified as Apple’s likely network partner.

iPhone is expected to be made available through T-Mobile in Austria and O2 in Ireland, with the Irish launch scheduled for March 14. Italy (with Telecom Italia) and Spain (with Telefonica) are reportedly also close to launch.

Apple has also been in talks with DoCoMo, KDDI and Softbank and Softbank to agree a Japanese launch of the product, though it remains unclear which of the three operators has won the prize.

The company’s chief operating office Tim Cook last week said Apple “is not wedded” to an exclusive arrangement in order to launch the product in every territory it wants to penetrate.

Apple continues to experiment with its business model. France’s LeFigaro claims electronics retailer FNAC is in discussion to distribute the iPhone through its network of French shops. That’s similar to Apple’s UK deal with Carphone Warehouse to widen availability of the device..

All these tidbits may go some way to explaining Apple CEO Steve Jobs’s seeming public absence since Macworld Expo. He’s instrumental to any final deal with mobile phone networks.

(yes we know the image is faaake – even more fake than their last one!!)