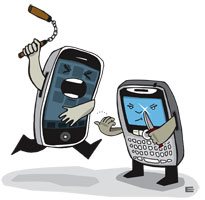 Research In Motion’s BlackBerry remains the darling in corporate America, but recent price cuts and the imminent arrival of enterprise-class support in the iPhone means Apple’s a growing contender for corporate purchases.

A May ChangeWave survey of 2,049 respondents reveals a still soft corporate technology spending environment in which Research In Motion continues to dominate the smart phone market. The survey was conducted among respondents with purchasing responsibility at their firms.

BlackBerry grew its lead, climbing three points to secure 76 per cent of the market, Palm its already vast lead (76%; up 3-pts) in the corporate smart phone market. Second-place Palm lost one point to take 17 per cent, "and shows no signs of halting its long-term decline," the researchers said.

Looking to the coming quarter’s planned corporate purchases, RIM has overwhelming momentum, with 82 per cent of respondents buying smart phones next quarter saying they’ll purchase BlackBerries – a five-pt jump since the previous survey in February.

"When you’re hot, you’re hot, and the latest results for RIM are scorching," said Tobin Smith, founder of ChangeWave and editor of ChangeWave Investing.  "If every product had such market dominance, it would be easy to pick the winners in each space," added Smith.

Despite the good news for RIM, it looks like Apple’s beginning to make its mark. iPhone sales climbed 2 points on the previous quarter, grabbing 13 per cent of the market, with the company now ranking second in terms of planned corporate purchases, according to Changewave. Pity Palm, which seems on the edge of becoming the third-place contender with just 8 per cent of purchasers confirming their company plans to purchase a Palm device.

When asked if their overall IT spending was on track thus far in the 2nd Quarter, 11 per cent of respondents said their company had spent "More than Planned" – up 1-point since February.  Another 27 per cent say they’ve spent "Less than Planned" – unchanged from previously. Which means things haven’t got worse, even if they haven’t yet recovered, the researchers said, though moving forward 24 per cent of respondents confirmed their spending will decrease in the coming third quarter.

"While the slowdown in overall spending may finally be stabilizing, this survey suggests that IT spending will remain anemic for the rest of the year," said Smith. "The one exception here is RIM, which just keeps on rolling."