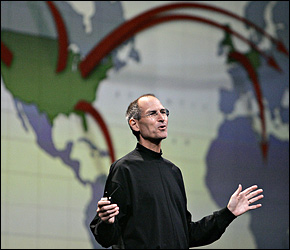 We know it isn’t really any of our business but the question has to be asked.  Is el Jobso getting a bit thin?  Every show it seems he is getting thinner and thinner…almost like he got cursed by a Gypsy or something.

One has to wonder, with his past, is his thinness affecting Apple’s stock price?

Now this doesn’t mean he has cancer again or is sick or anything.  He seems very spry on stage and overall very healthy and happy.  It very well could be a quotient of his age.  Maybe he is mimicking his products (or vice versa?)  Or he could be on the age-increasing technique of food deprivation…or maybe he likes being thin…

But just so thin….GAWD! When did we turn into our own grandmothers already!

Update: The WSJ says they spoke to Apple who stated that SJ has been sick for the last few weeks but powered through the WWDC keynote…also a commenter states:

My dad had the same cancer in around the same date that Jobs did, they have to redo your stomach because he has barely no pancreas, and my dad doesnt have cancer anymore (i hope) but he gets thinner all the time… he has lost like 50 pounds in a year.