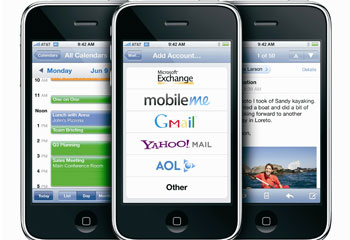 We predict short supplies of the iPhone 3G. Apple appears to have a hit on its hands with the release of the iPhone 3G, with carriers besieged by requests from potential buyers and the analysts at Morgan Stanley this morning predicting device sales will double, reaching 27 million iPhone 3G sales in 2009.

We’ll start with the analysts, then take a quick look at two examples illustrating the level of demand for the product carriers are encountering.

Morgan Stanley this morning raised its price target on Apple stock to $210, up $25 from the investor’s previous $185 target – and warned the impact could drive values even higher.

"We believe the market generally expects a doubling of iPhone units with the lower price point ($199) and we believe this is realistic, if not conservative," the investment bank said in a note. The bank expects 27 million iPhones to be sold in calendar year 2009 "with an average revenue of $550 per unit," said Reuters.

Hope or hype? It looks true to us. Apple’s UK iPhone 3G carrier O2 this week confirmed it is experiencing four times the level of consumer interest in the release of the new device than it did on the release of iPhone v.1.

More than 130,000 people have signed-up to receive further information from O2 concerning the iPhone 3G when it ships – that contrasts to 35,000 customers who registered such interest for the first edition iPhone, the company admitted.

With Apple preparing to release iPhone 3G in up to 22 countries on 11 July, company executives will probably be pretty positive that this level of interest appears international – Australian users are also anxious for the device.

The proof? One of Australia’s iPhone carriers, Optus, has been taking $100 deposits from customers hoping to secure on of the first batch of iPhone 3G’s to ship in the country – but the carrier has had to stop taking these deposits because it has been "overwhelmed" by requests.

Customers were filing their deposits in return for priority queuing and the chance to buy the iPhone 3G two hours before it is released to the general market. Over 4,000 Australians handed over their cash within 24-hours of Optus offering the deal. A spokesperson said: "Registrations have exceeded our expectations."

Apple’s other Australian carrier, Vodafone, has been attracting 40,000 visits each day to its iPhone website. This level of interest is remarkable, given the Australian population numbers just 20 million souls. If this level of demand is replicated on a global basis, it’s likely Apple will see that demand exceed its existing supply.