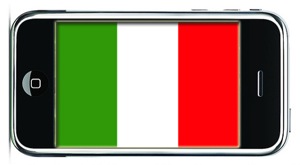 Just like Canada, Italian iPhone customers are angrily denouncing the deals they’re being offered by Vodafone Italy and Telecom Italia for the iPhone 3G. Italian customers reckon they are being stitched-up by both.

Italian users are so angry that they’re expected to pay double what anyone in the US or UK must pay for using an iPhone that they’ve also launched a petition against it. While the campaign hasn’t ignited the same level of international interest as that against the deals on offer from Rogers Wireless in Canada, the petition has still attracted 3,000 signatures inside a week.

"TIM and Vodafone prices are way too high and completely beyond any level of acceptability," the petition reads. "For this reason, all we ask is a price adjustment in line with the italian market. Otherwise, we’ll be forced to boicot the 3G iPhone."

Italy has the most 3G users in Europe and 1.58 mobile phones for every citizen, making it a strategically important market for the iPhone, which will also be sold unlocked there. For many Apple-loving Italians, the demand they pay twice what US and UK customers must hand over has raised concerns Apple’s Italian iPhone launch could flop.