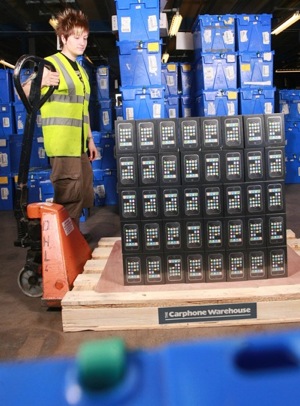 9 to 5 Mac’s spies are all over the iPhone launch. Here’s our latest image, it shows the first stocks of the iPhone 3G being delivered to The Carphone Warehouse.

The hugely anticipated mobile phone officially launches tomorrow, with Apple’s carriers and some selected high street retailers, such as Carphone Warhouse in the UK, opening early as the iPhone 3G is introduced globally.

All involved in the launch now warn customers to expect limited supplies, as early ordering systems in the UK and Australia this week buckled under the strain, indicating significant demand for the device.

A ChangeWave survey yesterday suggested iPhone will have a "tsunami-like" effect on the smartphone market. The researchers spoke with 3,567 consumers, finding Apple’s market share now to be catching up to that of Palm, which is looking less and less popular.

“These numbers are good news for Apple,”  said Tobin Smith, founder of ChangeWave Research and editor of ChangeWave Investing, “but it’s when we asked respondents about their planned smart phone purchases over the next 90 days that the tsunami-like effect of this marketplace transformation becomes crystal clear.”

The survey found that a full 56% of respondents who plan to purchase a smart phone in the next 90 days say they’re getting an Apple iPhone – a huge 21-point leap from the previous survey. And this means Apple seems set to dominate the smartphone market within weeks, grabbing 56 per cent market share and eclipsing current number one smartphone maker, Research In Motion.

ChangeWave also revealed that 55 per cent of current iPhone owners are Very Likely to buy the iPhone 3G for themselves or someone else in the future – half of these will do so within the first 90 days of release.