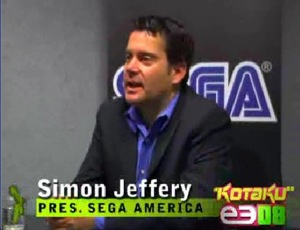 Sega of America president Simon Jeffrey has some pretty nice things to say about the iPhone, describing the Apple mobile as being as "powerful as the Sega Dreamcast".

Jeffery also said he’s delighted with how the iPhone version of Super Monkey Ball has been received, "Were deliriously happy," he said, interviewed by Kotaku.com.

He spoke a little on the relationship between Sega and Apple, "Our relationship with Apple is such that they talk to us really early about their gaming plans," he said. "We’re one of the small number of publishers with content on the original iPod," he added. "It’s very gratifying our content is so popular…we think the iPhone is everything that the N-Gage wasn’t, as a device," he admitted.

Jeffray is disparaging about most mobile phone games played on tiny screens, admitting he personally doesn’t see the attraction – but he does with the iPhone.

It gets better, though – the Sega exec’s confirmation that the iPhone is as powerful as a Dreamcast is followed by the revelation that, "we’re looking pretty sensibly at what we can do on the iPhone and what we can bring to that market. Bringing across some of the Dreamcast games to the iPhone makes perfect sense.

Jeffrey also confirmed Sega to be working to bring many more games to the iPhone, including "some pretty cool stuff". He predicts the iPhone gaming market will become extremely actve, "every games company is moving to it," he said.