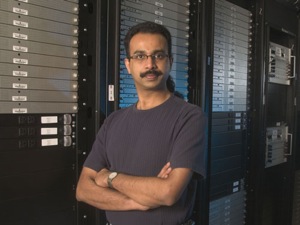 Buried beneath the hype surrounding iPhone and Apple’s growing Mac market share, the company still offers server-grade solutions that are making some dent in the high-end research markets – and now one of the company’s early champions is adding another Apple server farm to the collection.

Virginia Tech has deployed a new 29-teraflop Mac supercomputing cluster that’s based on 324 Mac Pros, it has been revealed. The cluster is at the Center for High-End Computing Systems (CHECS) within the Virginia Polytechnic Institute and State University. The system would have been ranked in the Top 100 systems of the June 2008 Top500 list of supercomputers.

Ensuring the Macs are all talking to each other, Mellanox Technologies’ 40Gb/s InfiniBand technology has been deployed to interconnect the machines.

Thad Omura, vice president of product marketing at Mellanox Technologies, said: "In 2003 we partnered with Virginia Tech to build the first 10Gb/s InfiniBand large-scale cluster that was ranked number three on the Top500 list at the time. We are excited to partner with Virginia Tech for the first large-scale cluster installation using 40Gb/s InfiniBand."

“Our mission is to build computing systems and environments that can efficiently and usably span the scale from department-sized machines to national-scale resources, and will meet the day-to-day needs of computational scientists,” said Srinidhi Varadarajan, Director of CHECS at Virginia Tech. “Mellanox’s 40Gb/s InfiniBand technology brings the necessary capabilities to our research activities and will be the focus for the design and deployment of the next generation of high-end systems.”