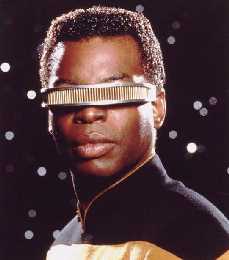 We didn’t see this one coming when we looked at Apple’s move to widen its product portfolio way back in May – now it seems the company is developing futuristic wearable displays, really?

Apple and Sony are apparently both developing wearable, head-mounted video displays, setting the stage for more pervasive personal multimedia, and offering interesting new usage patterns for productive and/or military use.

We imagine a future scenario could include a touch-sensitive flexible controller and a wearable display, all snugly connected by Bluetooth, with your computer in your pocket and your data stored in the cloud.

The researchers cite rapid sales growth in both the consumer (near 100 per cent this year) and military (sales approaching $1 billion in 2008 to triple by 2012) markets as reasons Apple and Sony are interested in head-mounted displays.

They also note that the technologies involved are increasingly inexpensive and accessible, while demand and potential uses increase.

Geordi La Forge (actor, LeVar Burton) would probably want one of these just to wear in  Star Trek: The Next Generation. He once moaned about his headset, saying, "It’s pretty much a living hell… 85 to 90 per cent of my vision is taken away when the VISOR goes on… I bumped into everything the first season – Light stands, overhead microphones, cables at my feet – I tripped over it all… So it’s a sort of conundrum – the blind man, who puts on the VISOR and sees much more than everyone else around him, when the actor actually does that he’s turned into a blind person…" (Well, that is what Wikipedia claims he said…

What else would make a cool Apple gadget, we ask?