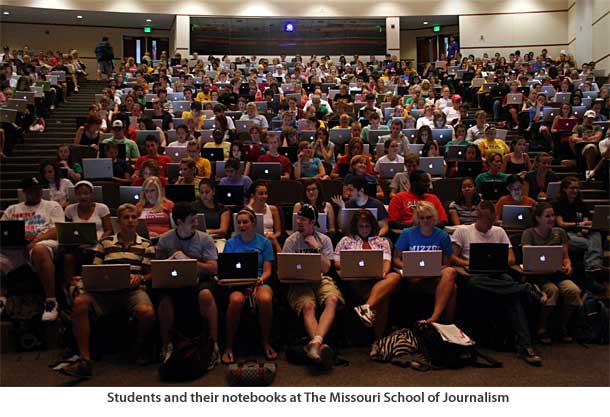 We’ve spoken about Apple’s continuing gains in the education sector, and as its Macs grow more popular the company’s educational teams are also pushing forward the message that its mobile devices – the iPod touch and the iPhone – could play a critical part in the future digital classroom.

It’s no great stretch of the imagination – companies like Studywiz and others have been creating, developing and selling solutions to educators that bridge the gap between classroom and home on the back of the iPod for years now – and the feedback from schools and administrators is that making education interesting, relevant and fun actually generates results.

But now things are getting far more serious, with a New York Times report looking at the US universities who are already deploying these Apple devices among students and staff. There’s a few – some highlights:

– Freed-Hardeman University in Tennessee is providing incoming students with a free Apple iPhone or iPod touch;

– Abilene Christian University in Texas has purchased 600 iPhones and 300 iPods for students entering this autumn;

– The University of Maryland has announced similar plans;

Some educators would deploy Apple technologies, but haven’t yet because of AT&T. Andrew J. Yu, mobile devices platform project manager at M.I.T said, “We would have probably gone ahead of this, maybe just getting a thousand iPhones and giving them out,” – it didn’t, because of reliability problems with AT&T.

The NYT report suggests that these technology implementations are somewhat controversial, but huge amounts of research has already been done to explore the benefits of such learning.

Research projects in Edinburgh, Australia and the US have evaluated the potential of iPods to engage and stimulate students in learning, revealing 20-30 per cent improvements in educational attainment and interest in schools were such solutions have been used.

Geoff Elwood, CEO of Studywiz parent company, Etech, explains: "Studywiz has proven to work on the iPod and now it’s perfect for the iPhone. What is really is exciting is that the iPhone takes mobile learning to a whole new level because now students have full functionality and mobility of Studywiz in the palm of their hand," he added.

The real power lies in the way using such devices gives individual learners control over how, when and where they learn. Using the iPhone (or, for that matter, an iPod touch), teachers, students and parents can access a range of interactive and media-rich tools. For example, students can take tests, access real-time information, submit assignments or blog, while parents can assess their child’s performance.

The US universities exploring these new learning tools aren’t alone, for example, the South Australian State Government has selected its Studywiz ePortfolio for a pilot project that will equip students with 21st century lifelong learning skills (using iPhones and the iPod touch).

Etech is already a driving force in the United Kingdom in helping schools to meet the British Government targets that by 2008 every pupil must have access to a ePortfolio and by 2010 every school should have a integrated online learning system.