The iPhone’s growing presence on the Web, having leveled off before the introduction of the iPhone 3G, surged in the month and a half since, according to Net Applications," reports CNN Money. 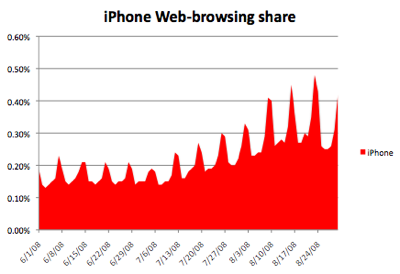 iPhone web use reached a record high 0.48% in late August, double its previous 0.2% record in June, the report claims.

NetApplications attributes the usage jump to the huge tranche of iPhone 3G sales since the device launched, writing: "The release of the iPhone 3G has brought large gains in web browsing share. Prior to the launch iPhone usage share had leveled off, but has since resumed its upward trend."

The iPhone’s share of global Web usage increased 58% in the course of the month – meaning "one out of every 333 Web hits in August came from an iPhone," the report explains.

It is also interesting to note that iPhone usage skyrockets on the weekends (as you can see in the chart).