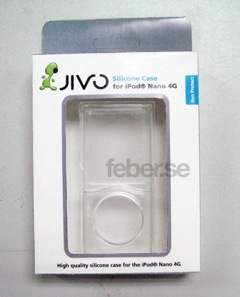 It’s Friday, thoughts are turning to weekend retreats after a shorter than average week, thanks to the US holiday Monday.

So – we’ve seen and heard all the pre-Apple event rumours this week – some will turn out to be true, some will be, erm, less true, and at this stage in the game the anticipation is fun all by itself.

We came across this latest image which claims to show the case for the new iPod nano, and yes, it confirms the time has come to say ‘goodbye’ to the fat nano (which we liked). We’re not saying this is true or false, by the way. Taken from Swedish site, MacFeber, we turned to the stalwart Google Translate service for its unique description:

“Our Bothan-spies have had hold of some nice pictures of the some of the first iPod nano 4G case, which is scheduled be shipped.

“The new iPod nano is both elongated and slightly more rounded than usual can hereby be seen as confirmed.

“Jivo distributed so far as we know from TNS here in Sweden.”