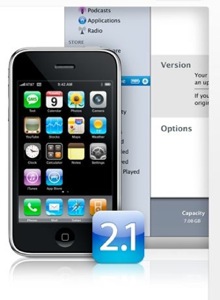 Keeping its promise, Apple released iPhone Software 2.1 this morning, promising a range of bug fixes and much improved battery life.

The update is a 238MB download. To get it, connect your iPhone to your computer using iTunes 8 and follow the on-screen instructions

Let’s find out what’s inside – any improvements? Any new features?

We’re updating as soon as we can, share what you learn in comments below…

Update: All appears to be as good as advertised – we have an official review and some of our user impressions:

We don’t know just yet if the patch addresses a bug which impacted some users who saw their applications fail and their iPod library content become unavailable.