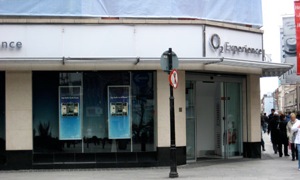 While reports claim Apple’s agreeing a deal with Carphone Warehouse for Mac sales in the UK, the company has seen setback in Ireland, where O2 Ireland has chosen to end sale of iPods and Macs at its Experience chain of stores.

Irish newspaper the Sunday Business Post makes the claims, citing an O2 source who said, ‘‘O2 has decided just to go after customers that it can retain relationships with. The problem with iPods and computers is that there isn’t an ongoing revenue stream in the same way as there is with a mobile phone customer."

This is a bad thing for Apple as it limits the company’s high street presence in Ireland. O2 has been selling Apple equipment in its flagship O2 Experience Stores since 2004, the report informs.

These moves do make it more likely Apple will open up its own chain of retail stores in Ireland, but information on such plans remains scarce. Apple has so far only opened one store in Northern Ireland in Belfast.