Guess the N97 isn’t what they meant by iPhone killer, but next time they are serious.  More screen/area=hotness? 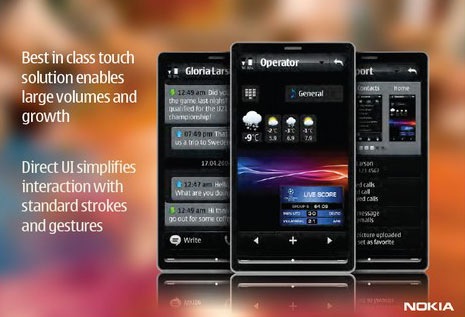 This past Friday, a slide from Nokia’s Capital Markets Day appeared on the internet depicting a touchscreen-only Nokia handset with a striking UI. Sure the slide looked a bit iffy and the wording of the accompanying notes isn’t your grandfather’s English, but anyone who has sat through a presentation given by a handset manufacturer knows that’s nothing out of the ordinary. Whiners immediately attacked the slide and shouted it was fake – even we were skeptical as to its authenticity. As it turns out, it’s as real as they come. The slide, pictured again above, is part of a large presentation from Capital Markets Day that is now publicly available. Sure the handset pictured is a mockup but it was indeed created by Nokia. While it does not necessarily depict an actual handset currently in the company’s pipeline, it does give us a glimpse of one of the directions Nokia is headed. Most substantially no doubt, is the fact that the mockup shows a UI that remarkably does not look like something out of War Games as does S60.

Could this be the first official hint that Nokia is looking to finally build a UI as visually pleasing as its OS is capable? Only time will tell. As to the concept of a touchscreen-only handset in the works from Nokia, the full presentation is peppered with mockups of touchscreen-only handsets. In fact, Nokia even used a closed N810 as a mobile phone in several images. While this could lead many to believe that Nokia does intend to release a similarly-styled device in the near future, it could also simply mean said mockups were deemed the best way to have the audience focus on the screen shots being presented without being distracted by the handsets. Hit the read link for a PDF download of the full 20 MB presentation and enjoy.