Is the iPad going Retina?

With the launch of  Apple’s iPhone 4 and its gorgeous retina display, it’s a high probability that Apple will soon update their other iOS devices with better displays as well.   Perhaps you don’t need 326 PPI on a device that is meant to sit on your lap?  Nonsense!

We have some that evidence of an iPad with a retina display is in the works, and this evidence comes from Apple’s own Developer SDK documents.

Let’s begin with the iPhone so comparisons can easily be made. Apple would like all developers to amp up the resolution of their iPhone applications so they look even better on the retina display. These are universal applications as they run on older iPhone’s and iPhone 4’s in one binary with separate graphics.

When looking through the SDK it is easy to tell how Apple labels their own internal universal applications. A perfect example is the Home Screen application which Apple has dubbed the “Springboard” in its SDK files. 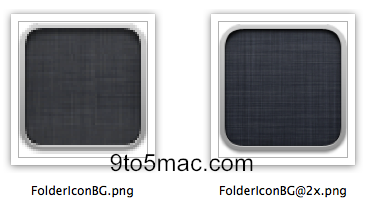 The image above shows the graphics used for the iOS 4 Folders system. On the left is the image used for iPhone 3G and iPhone 3GS and on the right is folder of iOS 4 on iPhone 4. You can see the one for iPhone 4 is labeled with “@2X” at the end of the name, before the extension of “.png.” The 2X means the graphic is twice the resolution so it looks great on the twice-the-resolution retina display. 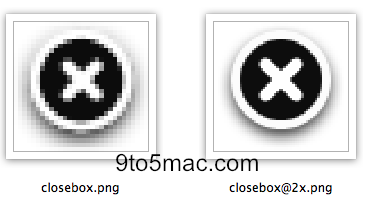 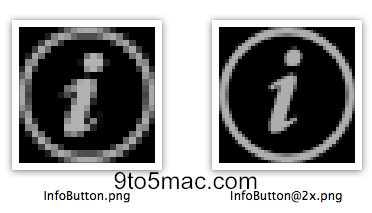 Above are two more examples of the same filing system used by Apple. You can see both images have the iPhone 4 Retina version on the right, and the standard version on the left. The first image shows the close box used for deleting an app from the home screen, and second is the standard info button used throughout Apple and third-party applications.

Now, it is clear that Apple uses the “@2X” filing system for universal applications for iPhone 3G and 3GS and iPhone 4. The evidence for iPad going retina is within this filing system. 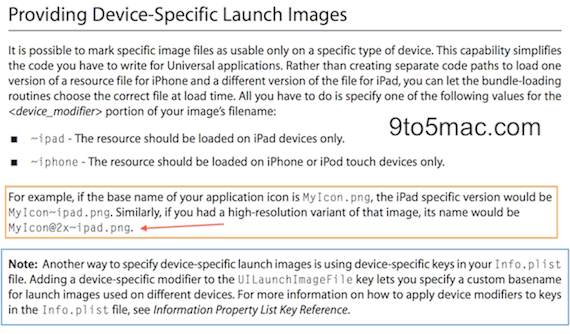 As you can see in the image above, Apple notes “MyIcon~ipad.png” for the standard iPad existing today, and a “higher-resolution variant “MyIcon@2X~ipad.” As you can most likely already tell, Apple here is likely referring to a higher-resolution iPad.

There are two sets of icons for the two types of displays of the iPhone, and now the same for two types of iPad Displays. We know that a higher-resolution variant of the iPad is now coming soon, and from this we have educated speculation that iPad will go retina. This is based on Apple’s past history of introducing a new feature and then spreading to their rest of the lineup. An example of this is the iSight camera first appearing on iMacs introduced on October 12, 2005, and now appearing across the Apple lineup including notebooks and now the iPhone 4.

Of course this can also be a typing error in Apple’s documents, but the likelihood is slim as Apple attempts to make sure everything they put out to the world is stated correctly. This is also within the iPad development context so it is unlikely they simply wrote iPad where they meant iPhone.

What do you think? Let us know in the comments.