Today, Fring announced a major new update to their iPhone application. The new update supports iPhone 4’s front facing video camera for two way video chats as well as multitasking for iOS 4. The neat thing about Fring is its lack of restrictions, meaning you can two-way video chat with any device running Fring and a front facer. Fring shows this in action below:

We’ve played with the new Fring for a bit and discovered one let down and that is the lack of AIM video chat support. This is something we would have liked to see provided natively in an Apple iChat app but it does not look like we will see something that soon. AOL: You there? Want to give us a preview of AIM with video chat for iPhone 4?

On the brighter side of things, video chat does work on other major services such as Skype. In our few basic tests, we discovered that video chat with Fring over 3G is very mediocre. In a couple tries we successfully connected but this little thing called audio wasn’t present. I could not hear Seth at all during two of our tests. It could be the 3G connection in New York or an uncommon bug. Who knows? We’ll probably see soon enough. Additionally the video quality is almost unusable, I could hardly see the other caller. Over WiFi, it is a bit clearer, though.

Moving to other enhancements, Fring got the iOS 4 treatment: it can now multitask. You can use fast app switching, and the app will fully run in the background. For example, if you are in the middle of a call or video conference, you can hit the home button, move to another app, and a red bar will sit on top. This is identical to multitasking during a voice call or FaceTime chat; it works flawlessly.

Another let down is the lack of Retina Display support. This update is built around iPhone 4 as it utilizes its front camera. It seems odd that the developers didn’t beef up the graphics and icon to look groovy on the new display.

Check out some test photos after the break: 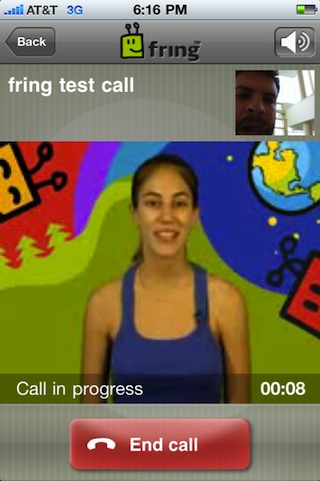 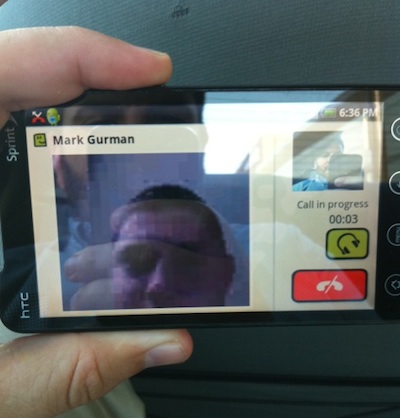