It was only five days ago when the entire “App Store Hacked” phrase was put into play, but here we are, July 9th, 2010, the 2 year anniversary of the App Store. What do we find out today? It appears that more iTunes accounts may have been compromised. Last time was the Books section by a Vietnamese developer, Thuat Nguyen. Today, we get ‘WiiSHii from China, in the travel section. As you can see there are 11,449 Travel apps. This means their apps did not shoot to the top because there are so few apps:

So here we go: WiiSHii has a large set of travel applications for the both the iPad and iPhone. Their apps are very similar, all different editions of each other. They all start with the same name of “GYOYO.” As you can see the screenshot below they have made their way into chunks of the Top Paid iPhone Travel section.

This is very similar to last week’s app farm story. They clearly used some cheating mechanism to get their apps in the top 100. Additionally, Ars Technica reports about a user who was falsely charged for a bevy of apps from the same WiiSHii development company:

UPDATE: The Developer, WiiSHii, has been completely removed from the App Store. Glad we can help Apple keep iTunes clean. Also, that was fast, just like last week’s incident.

Please read the rest after the break: 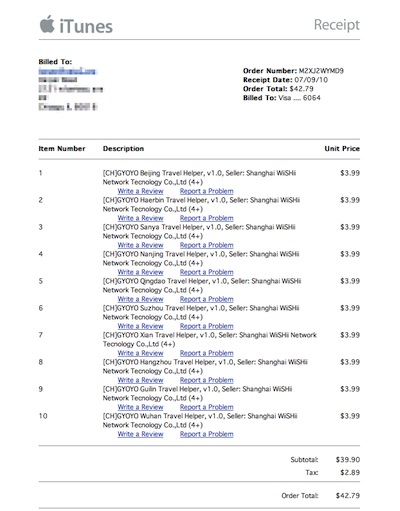 This seems to indicate that the iTunes App Store may have been manipulated in some shape or form once again. Perhaps it’s time for the iTunes fraud sheriff to step in.