An interesting point this morning from Philip Elmer-DeWitt, who notes that independent investors seem to be more accurate when it comes to making AAPL estimates than those analysts who get regular paychecks from big banks.

In a note he (I think erroneously) calls ‘Amateurs vs. Professionals’, PED points out just how much more accurate individual investor bloggers were at predicting Apple’s fortunes than were those professional analysts from analysis firms.Perhaps that’s because in the case of bloggers, their fortunes are directly related to being right, while analysts will still get paid even if they’re wrong.

In any case, if you are an AAPL investor, it might make sense to take a look at what the ‘Amateurs’ have to say.  As a whole they were clearly much more accurate than the big investment bankers. 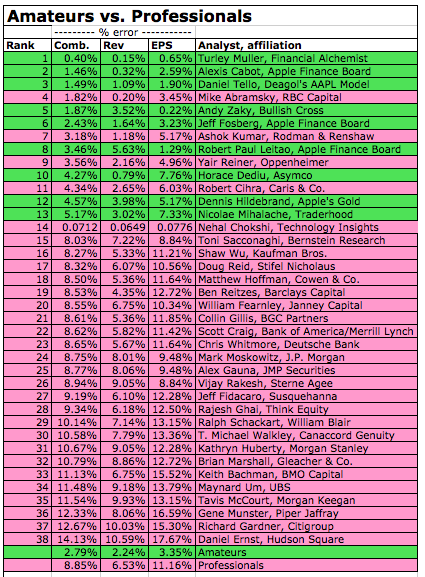 He writes, “Everybody underestimated those blow-out iPhone sales, but special mention goes to RBC’s Mike Abramsky, who underestimated them less than anybody. Bernstein’s Toni Saccanaghi took the honors for Mac unit sales. Canaccord Genuity’s Mike Walkley nailed the iPod number.

“And although nearly everybody overestimated how many iPads would be sold, three analysts published estimates that came within 188,000 units: Rodman & Renshaw’s Ashok Kumar, Bank of America/Merrill Lynch’s Scott Craig and William Blair’s Ralph Schackart.”

More here plus charts and stuff.