Apple in talks to buy Spotify? [Update: No] 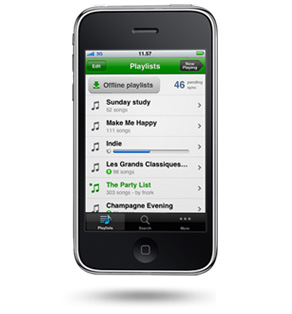 According to TechCrunch, Apple is in early discussions to buy music streaming service Spotify.  Spotify is an incredibly hot music service in Europe but hasn’t been able to get a footing in the US.  (They haven’t been able to sign one label).

Some put the blame on Apple for that and accuse Cupertino of threatening lost wages from iTunes if the labels sign up for the streaming service.  Apple approved Spotify for use on the iPhone in Europe in April of last year so Apple probably has some definitive proof of lost revenue, if that is the case.

A $1 billion Spotify deal with Google was apparently close to completion last year but the deal fell through because Google was “demanding that all label deals be grandfathered in. And Spotify wanted a $800 million+ walk away fee if the deal faltered (Google had a similar provision in their Admob acquisition)”.

Apple bought streaming music service Lala at the same time as Google flirt with Spotify but all of Lala’s label deals disintegrated when they got purchased (as per their contracts) and Apple was left with the engineering talent and technology.  Spotify’s label deals are likely of the same nature so, to me, it is surprising that Apple would be after another set of streaming engineers, another set of technology and some more people with music industry experience.  They clearly have some plans for all of that space in North Carolina.

Update: Spotify contacted CNET to let them know they have no intention to sell the company.