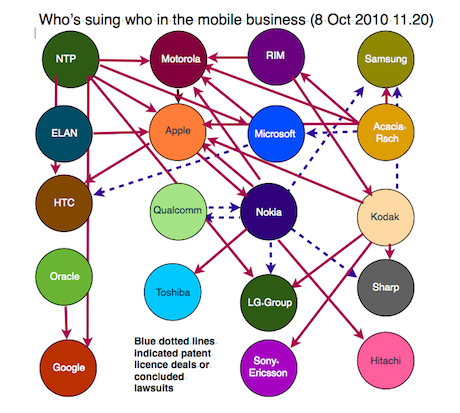 Apple’s legal battle with Nokia looks to have seen some setback, with staff at the US International Trade Commission (ITC) telling the judge in the case that Apple’s patent allegations are ‘unfounded’.

“The evidence will not establish a violation” of Apple patent rights, the staff, which acts on behalf of the public as a third party in the case, said in a pre-hearing memo released yesterday.

Bloomberg tells us the case will begin before Judge Charles Bullock today. Apple is attempting to have Nokia’s US phone imports banned on strength of its four allegations.

Nokia also has a case against Apple. Meanwhile, Apple is suing HTC and Motorola over Android phones, and Microsoft is suing Motorola. In fact, the mobile business is a minefield of legal fun and games, as displayed in the above info-graphic.

Staff at the ITC do a pre-case briefing for the Judge. The Judge isn’t obliged to follow the advice, but it doesn’t look good for an Apple (AAPL) victory.

According to Bloomberg, “staff said that some aspects of the patents were invalid and others weren’t infringed.” They also said that in the even the Judge finds a violation, he “should recommend an order to ban imports of specific Nokia phones.”

The Judge is set to issue his decision in February. This must then be reviewed by a six-member commission. Nokia’s complaint against Apple is set to go to trial in November 29, while additional Apple claims against Nokia are set to be heard within a case against HTC in February (phew) Bloomberg informs.