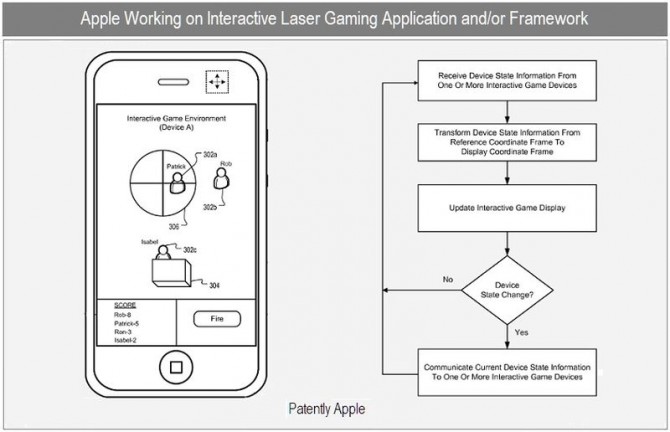 Author Ad Placeholder
Will only appear on redesign env.
Back in the early days of the motor car the Edwardians used to like to play a treasure hunt game, in which clues and objects would be left around the country for competing teams to collect. They were about mobility and location.

Today we also like games such as laserquest, or paintballing, in which the action is all about hitting the target before getting hit yourself.

Now Apple seems to have a plan to put the pieces together for a fabulous laser tag experience using your iPhone. You’ll be playing strategic, location-based games with others across large areas using your phone as a laser tagging device. Keep your head down, be wary, and you just might win.

Patently Apple tells us Apple’s working on an interactive laser tagging game/framework. This patent discusses the makeup of a cool-sounding laser tagging game with geopositioning technologies. It uses virtual lasers and could allow for future gaming headsets so you and your friends could “coordinate that killer ambush”.

Reading through the patent you find technologies for finding targets and team members, positioning, firing and laser tagging tech, features which will let you know when you’ve been hit, and, naturally, the ability to speak with other team members during game play.

What I also find interesting to speculate upon is just how Apple might announce this at a keynote: would we see Steve Jobs hunt down other executives in the Apple company car park? Would we see Apple’s design team take on all comers in a canteen laser tagging fight? Or would we be sent out on a treasure hunt, following a trail of RFID-laid NFC clues?