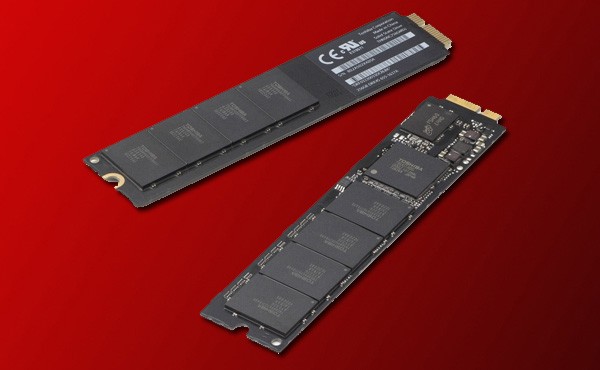 Toshiba has introduced new solid state storage that’s compatible with the MacBook Air but offers up to 256GB of capacity.

These are the same as those used in the MacBook Air, which are also manufactured by Toshiba. Apple’s association with Toshiba is extensive. Toshiba made the hard drives at the center of the original iPod range, for example).

One caveat — these SSDs aren’t available to consumers, so we’re unlikely to see too many home upgrades going on. These are available to larger shops, which suggests it is only a question of time until a 256GB upgrade is made available for smaller-capacity MacBook Airs. We can’t say if this SSD is compatible with the 11-inch MacBook Air, for example.

Some interesting tech data is contained within the press release announcing the new products:

Toshiba’s new 64GB and 128GB Blade X-gale SSDs are the thinnest available within the company’s comprehensive portfolio of SSD solutions.  At a thickness of 2.2mm, the modules are 42 percent thinner than that of a typical mSATA SSD, and Toshiba’s advanced wiring technology has assured optimized wiring layouts and data transfer rates in this new form factor.  Thanks to Toshiba’s base design technology that minimizes board warpage during thinning, 256GB capacity can be achieved when mounted on both sides, the largest density in the industry for small type SSD modules. Toshiba also offers designers a choice of mSATA and Half-Slim SSD modules in capacities up to 128GB.

Another firm, Photofast, introduced its own SSD upgrade option for the MacBook Air last month. 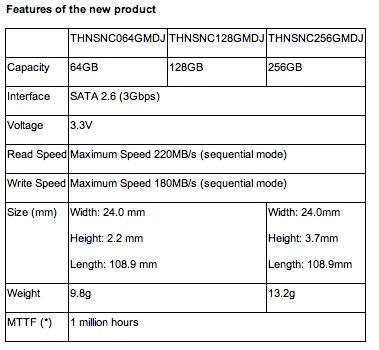