Update: TJ Maxx has now said they bought all of these iPads at retail price and are taking the $100 hit for publicity (good move). Steve Jobs re-iterates that TJ Maxx isn’t an Apple authorized dealer and Apple won’t price-match them. 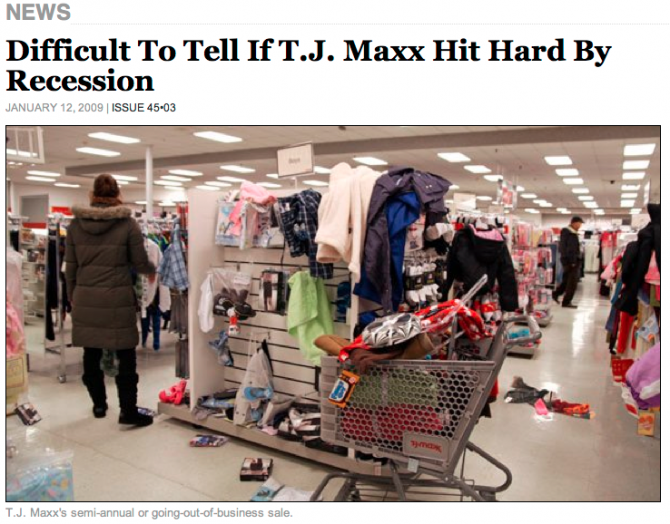 If you ever had a question as to whether Apple was serious about locking up the tablet market right now, for Christmas and beyond, you had your answer this afternoon as reports of new iPads were showing up at TJ Maxx and Marshalls.

This is as agressive on both pricing and placement as I’ve ever seen Apple and the biggest indication yet that they aren’t just after the 20% “high end” market in tablets that the Mac commands.  Apple wants to be the mainstream tablet maker and have the iPad be as ubiquitous as iPod.

When Apple started selling iPhones at WalMart last year, you knew that they were aiming at big market share numbers for iOS products.  How far will they go?  Moving to TJ Maxx is another giant step.  What’s next?

The $399 price tag is “Crazy Eddie” insane.  That’s $200 less than the smaller Samsung Galaxy Tab (the only “real iPad competitor”).  Looking at Apple’s own line,  $399 is the same price as a 64GB iPod touch and about $200 less than the base iPhone 4 when purchased off plan, not that you’d ever find any of those products at a TJ Maxx or Marshalls.

How can Apple make any money off of a $399 iPad?  This could be what Tim Cook was referring to when he said Apple’s margins would be significantly lower going forward.

We were surprised to see the iPad discounted even $12 at Sam’s Club last week.  Discounting it $100 totally throws off the whole ecosystem.  Who is going to go to Best Buy or Target (or even Walmart) to pick up an iPad when it is $100 cheaper at TJ Maxx?  Apple sells refurbished iPads at $449.  $399 for a new one makes no sense.

Apple’s other retail partners have to be upset with this model.  Perhaps we’ll see some more pricing changes arriving for Black Friday.

Is Apple trying to kill off the competition before they even have a chance to gain a footing?

You might notice that there aren’t any real iPod touch competitors out there.  Why is that?  Up until recently, you could get an iPod touch for under $200 (and you can often pick up a previous edition iPod touch for $150).  I don’t think you can make a competitor for much less than that.  Even with the free Android OS, device manufacturers simply can’t make a competing hardware much cheaper.  Samsung (who make a lot of the parts in Apple’s iOS products) aren’t even trying to push their Galaxy Player in the US because they can’t make it cheap enough.

Apple has sewn up the iPod touch market because of aggressive innovation and pricing.  It wants to do the same for tablets, a much bigger potential market and one that could become as big as PCs.

Another less plausible theory is that Apple went overboard on production.  Apple initially wasn’t able to meet iPad demand for almost a half year, but there is a possibility they’ve over-compensated and will need to sell a lot more products for the holidays than they could at their March $499 price points.  If they are already getting production ready for the iPad 2, they’ll need to make sure Holiday inventory moves.

But TJ Maxx and Marshall’s aren’t just aren’t first run stores.  They buy up excess inventory from manufacturers and other stores at lower prices “and pass the savings on”.  Literally nothing in their stores is first run products.  That’s why I initially thought that these products were refurbished.  Apparently, they aren’t.

Did they do the same with Apple?

…and what about the Apple Brand.

It is going to take a hit, that’s for sure.  TJ Maxx carries Polo and Chanel and other top fashion brands but those are overproduced, irregular and last season.  Apple is putting their flagship product in TJ Maxx.  There is no other way to put it: TJ Maxx is a glorified wap meet (no judgements, most of my underwear probably comes from TJMax/Marshalls/Ross). But there’s no way to spin this as good for the brand.  So much for high end.  Welcome to mass market.

Whatever the case, the $399 iPad changes the game in a big way.  Christmas iPad shoppers: It is time to get a deal.

(top image via the Onion)