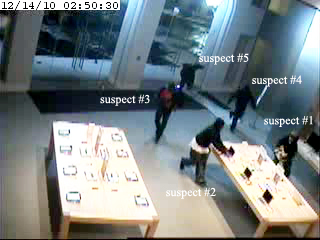 CTNow reports that the Apple Store in Greenwich, Connecticut was the scene of a smash and grab robbery Tuesday morning. Five robbers were involved in the scheme (pictured above) and they are yet to be apprehended. According to the news report “computers and other electrical equipment” were stolen which an estimated loss amount of “tens of thousands of dollars.” The investigation is ongoing and if you know anything we recommend contacted the local authorities. Apple Stores have been the scene of robberies in the last few months with robberies taking place in Dallas, San Diego, and Pittsburgh.