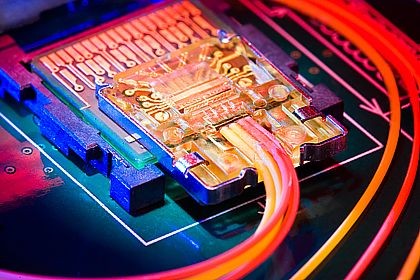 We’ve been hoping Light Peak might make an appearance in new Macs since the technology first made an appearance working with a lab demo Mac Pro in 2009. We’ve been excited for the super-fast and super-flexible connectivity standard ever since — now it seems there’s a way to go before its ready to hit the market, according to Intel.

Author Ad Placeholder
Will only appear on redesign env.
During the Storage Visons event at CES last night, participants extolled the virtues of USB 3.0 and told us about faster Wi-Fi….but Light Peak doesn’t seem on its way, according to LaCie’s senior engineer, Mike Mihalik.

“Intel has been the driving force for this technology. What we know for sure about Light Peak is that we know how to spell it,” he said, as reported by PC World. “And that it’s intended to be a high-speed interface and it will support almost any protocol for transferring information from A to B.”

What people hope for from LightPeak is use as an interconnect technology capable of handling everything from your monitor to your drive, at long distances and speeds up to 10Gbps (100Gbps within a decade, apparently).

“Development needs to continue and we need to debug before we can turn the technology into a product,” reports Mihalik.

So, perhaps we should relax on our expectations here…