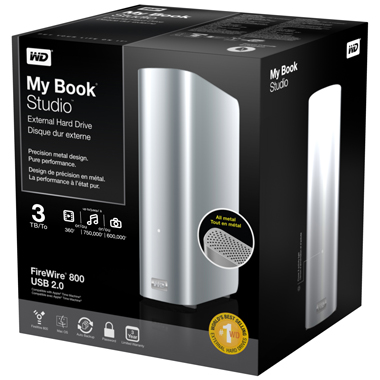 There’s not much to say about the new Western Digital My Book Studio 3TB hard drive.  It looks quite nice and would go nicely with a Mac Pro or any aluminum Mac. The new MyBook Studio, unlike the previous My Book LX models, doesn’t have the LED display which showed free space and other nice specs without the need to dig it up from the connected computer.  It does, however, have a quiet, cool running green hard drive with a fan-less enclosure. But the $150/$200/$250 for 1TB/2TB/3TB models, it isn’t going to hit 9to5toys.com anytime soon.

In fact, the same 3TB Western Digital Internal Green Drive resides in a USB-only package for only $130.  Because this is a green drive, the extra speed that Firewire provides isn’t as noticeable as with a high performance drive.  See speed tests and more images below.

Here’s your backside.  Notice Mini USB which is a more common bus adapter these days..  The package comes with a Firewire 400 to 800 adapter for older Macs and a locking bay.

The USB tests were respectable, coming off of a current 13-inch MacBook Pro: 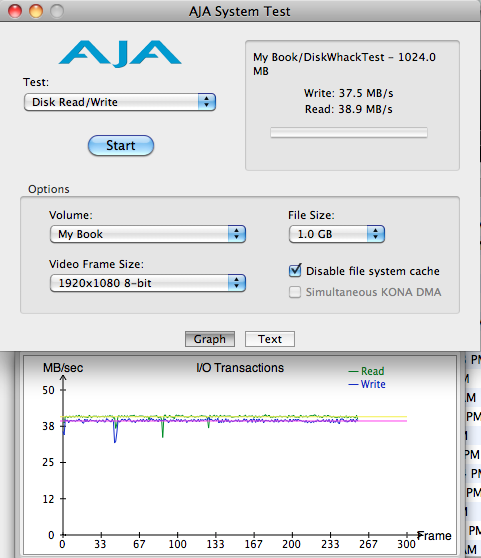 Firewire 800 was faster but not blowing any doors off (and curiously a faster write speed than read): 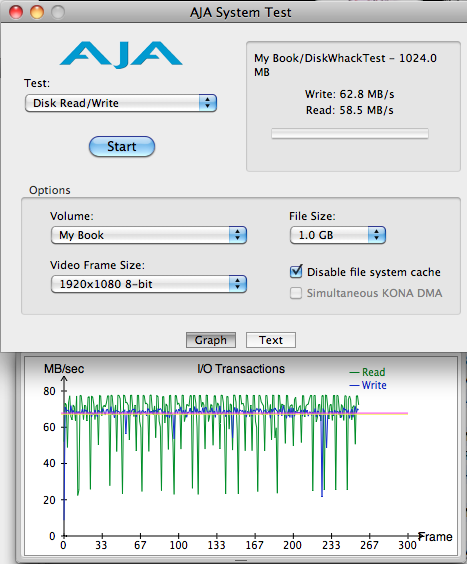 We love Western Digital Drives here, they are no doubt at the top of the heap for performance and reliability.  But this particular My Book drive is a bit more expensive than it needs to be.  Being formatted Mac and having a silver aluminum shell doesn’t double the value of a drive.  Firewire is the only”nice to have”, especially for video editing and other data intensive activities.   However, with Thunderbolt becoming the norm on the high end and Firewire-less MacBook Airs becoming the most popular type of Mac, Firewire is a shrinking niche.

Reccomendation: Unless you need a handsome drive that matches your Mac or mediocre Firewire speeds, head over here and buy the same internal green drive in a much more inexpensive (but still great quality) WD enclosure, for a fraction of the cost.

If you want a faster, higher capacity drive, we loved the 6TB My Studio II, reviewed here.